The effects of COVID-19 on local food systems and rural livelihoods: An e-Dialogue overview 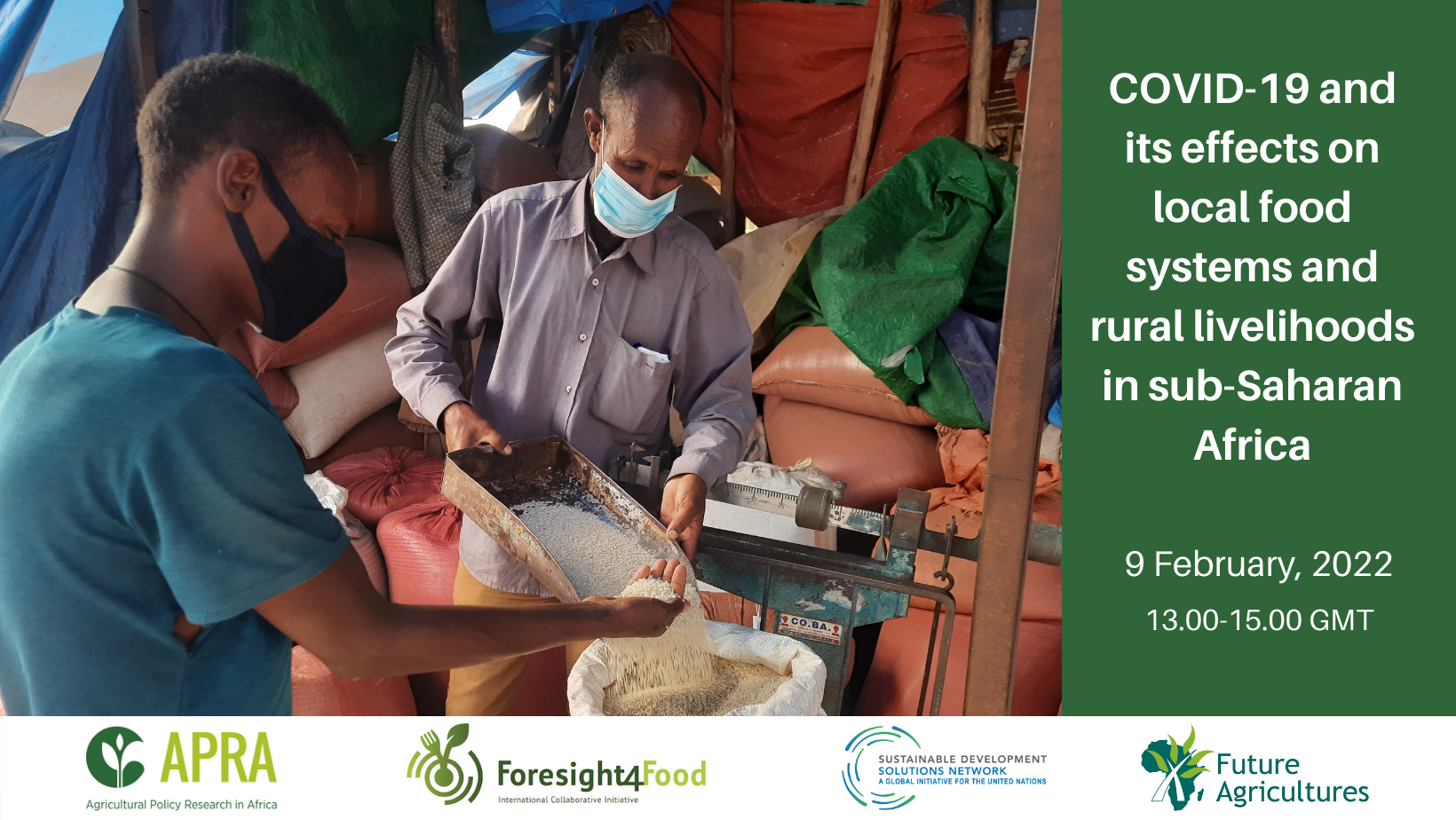 As COVID-19 took hold in March 2020, the primary focus was on ensuring that people stayed healthy and safe from infection. However, it soon became clear that the pandemic would have much further reaching effects than just the disease itself – and nowhere was this more evident than in sub-Saharan Africa.

Restrictions enforced to help curb the pandemic created additional challenges for a region already facing myriad trials, from climate change and malnutrition to political unrest and inflation. Many parts of society were negatively affected, none more so than the agricultural sector. Thus, on 9 February 2022, researchers of the Agricultural Policy Research in Africa (APRA) programme, together with expert commentators, came together for a two-hour e-Dialogue to discuss, more specifically, the effects of COVID-related interventions on rural livelihoods and local food systems in the region and what can be done to support their recovery.

Despite the fact that households in Africa demonstrated impressive resilience and managed to defy the United Nations World Food Programme’s prediction that the number of those experiencing hunger would double, families did not go unscathed – and “an intersecting crisis between food and livelihood has been noted,” highlighted Amrita Saha, APRA researcher and Fellow at the Institute of Development Studies. The lockdown restrictions, which varied in severity between countries, posed one of the biggest challenges. Movement restrictions halted in-country and cross-border trading, causing huge financial losses. Unable to match their usual trading levels, households saw decreases in income and, in turn, experienced higher food insecurity and lower living standards. These movement limitations also had consequences for those (such as farmers) working elsewhere in the production process: for example, with significant labour shortages and breaks in supply chains further contributing to reduced food supplies and incomes. Thus, the APRA findings suggest that the shock of COVID-19 has resulted not so much in a “food production crisis” as an “income-nutrition-livelihood crisis” for many communities.

The lack of State aid and humanitarian relief created issues in many countries. Social support payments for individuals in sub-Saharan countries typically totalled less than US$5 per person, and a lack of communication and accessibility saw large numbers unable to obtain even this small amount. There were also discrepancies between support measures provided to urban and rural communities, with the latter being more frequently overlooked. In these instances, households relied on aid from local religious organisations and traditional leaders rather than the state or other outside agencies. But, according to John Thompson, CEO of APRA and Senior Fellow at the Institute of Development Studies, this was “very piecemeal”. While there was evidence of the emergence of a “COVID economy” in some places, where people were able to adapt the restrictions by shortening supply chains, producing and selling masks and soaps, and so on, this was also patchy.

In addition to new challenges, the pandemic served to exacerbate and highlight existing concerns – a key one being that of gender imbalance and bias. “Women have borne the brunt of COVID-19 related impacts,” stated Akosua Darkwah, associate professor of sociology at the University of Ghana. For instance, women in the agricultural sector “struggled to access resources previously – and COVID-19 only exacerbated this issue,” shared Aida Isinika, Professor at Sokoine University of Agriculture and Country Lead for APRA Tanzania. Government measures and policies created to assist families during the pandemic also rarely took women into account, said Sandra Gagnon, Programme Officer at Canada’s International Development Research Centre. “Policies aimed at formal businesses excluded low-income women engaged in production and informal trading,” she added. Furthermore, with schools closed and children at home, women were tasked with childcare and home-schooling responsibilities – leaving them with notably less time and energy to dedicate to their own work and pursuits, either on- or off-farm.

Planning for a stronger future

A number of recommendations were made with regards to what households, communities and governments can do to be more resilient to future shocks, such as the pandemic. Digital innovation was a key suggestion, as this “will create opportunities for extension, remote education and trade,” suggested Matsautso Chimombo, Lecturer in Rural Sociology at Lilongwe University of Agriculture and Natural Resources and APRA Malawi researcher. Greater access to the web will allow for online trading when it is not possible to do so in-person and, in some instances, this is already occurring: Darkwah revealed that traders in Ghana began engaging in deals virtually following the introduction of movement restrictions. Providing better internet and telecommunications access would also serve to enhance the flow of information to all actors across food chains, which is critical so that “individuals can make more informed decisions,” said Isinika.

Governments also need to ensure their policies and support measures are more inclusive, encompassing both genders, all age groups – youths were particularly affected by the pandemic – and communities. “While it was positive to see that social protection was ramped up,” noted Steve Wiggins, Senior Agricultural Economist at the Overseas Development Institute and APRA researcher, he saw no reason why they could also not have increased even further. While richer countries in the North didn’t hesitate to run-up large budget deficits during the pandemic, most African countries were constrained in their spending as a percentage of GDP. However, it seems that some lessons have been learned by those in power and positive changes are occurring as a result – with ministers in Malawi dedicating more funding to hospitals and medical supplies, for instance.

Finally, it’s important for people to recognise the value of community. While “community support efforts rose to new levels,” explained Adebayo Aromolaran, Professor at Adekunle Ajasin University and APRA Nigeria researcher, households should better utilise farmer organisations – as these provide an invaluable source of assistance across a number of areas, including loans of otherwise costly agricultural equipment.

Ultimately, the agricultural sector needs to be viewed more broadly and larger emphasis put on more than just a few primary areas – such as imports and exports, economic growth, and environmental impact. Only then can resilience be maximised and guarantees put in place to ensure that no-one is left behind in the face of evermore frequent shocks and stresses.

For more information on the e-Dialogue, see:

Did you attend the e-Dialogue? If yes, we want to hear from you! Fill out this feedback survey now and let us know what you thought.

All APRA COVID-19 publications can be found, here.

The next APRA e-Dialogue, ‘Transition Pathways and Strategies for Supporting More Equitable and Resilient Food Systems in Africa‘ will be held on March 23rd, 2022. Register, here.