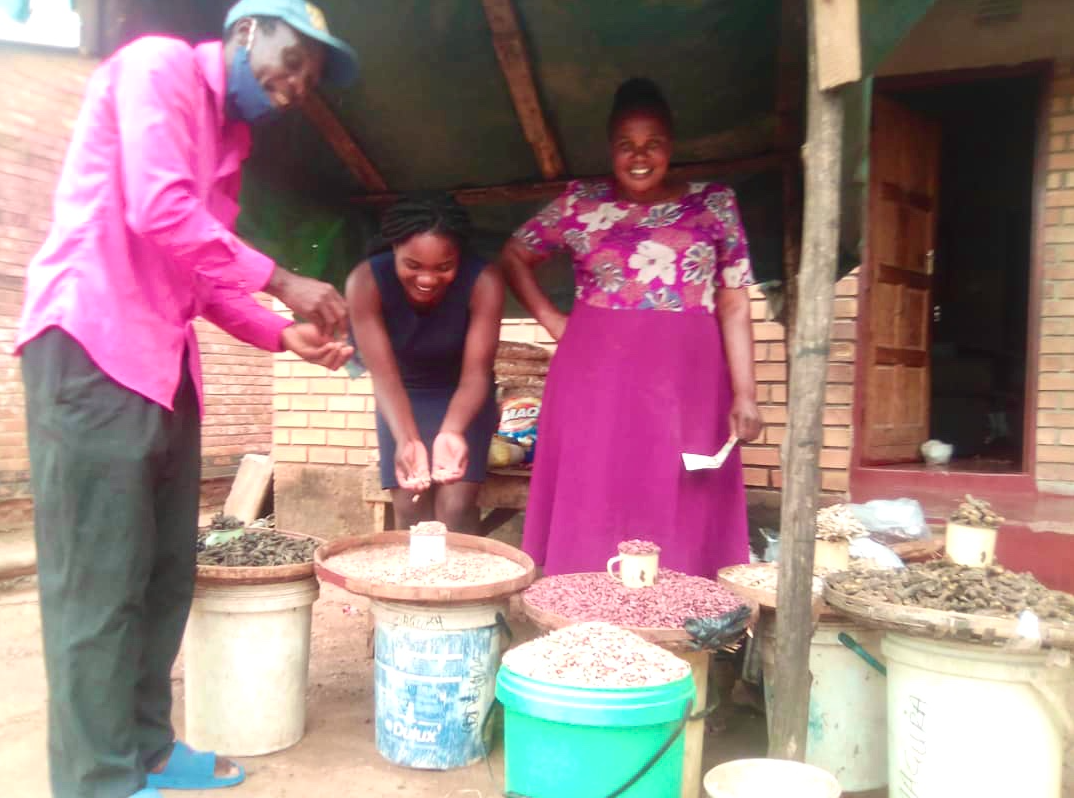 A few weeks back Oxfam released a major report, ‘The Inequality Virus’, documenting the way COVID-19 has affected different populations and parts of the world. The now well-established impacts on the already-marginalised are presented, alongside how the rich have benefited. But the debate in Zimbabwe is currently rather different – people are wondering why the virus is hitting the urban rich and well-connected the most.

The last weeks have seen a massive spike in reported cases and deaths in Zimbabwe. The deaths of senior politicians, party officials and business people have been widely reported. It has provoked a level of concern, even panic, across the country, especially given the parlous state of the health care system.

Last weekend I caught up with the team who is monitoring the situation across our rural study sites – in Mvurwi, Gutu, Masvingo, Matobo, Chiredzi and Mwenezi areas. This is the tenth blog in a series (see here, here and here for updates since last March)

A disease of the urban rich and powerful?

In our rural study sites the experience of COVID-19 as a disease remains limited. Team members were able to report a few cases from each of the sites, with some deaths usually among older business people, but many of the funerals were of those coming back from towns or from South Africa. COVID-19 is still, it seems, not a rural disease – although of course, given the complete absence of testing in these areas, we cannot know for sure.

Over the past week or so, team members have been discussing why COVID-19 seems to be concentrated among the urban rich and powerful with locals in the rural areas where they live. Many explanations were offered. The rich move around more, they fly in planes, drive in cars; we barely move, especially with lockdown. The rich don’t do physical exercise, they move in cars; we walk everywhere – we have to, and do manual work. The rich work in offices and enclosed spaces; we are outside, in the clean air. The rich eat junk food, and have conditions like BP, diabetes and so on; we have fewer chronic conditions and get good food from our own local vegetables, which give immunity.

All this makes sense epidemiologically, but what was central to local narratives across sites was that local responses were not just passive – the consequences of being poor – but due to active choices about prevention and treatment. Unlike a few months ago, there is a tangible fear of the virus now. The news reports of the rich and influential dying despite their privilege, mean that people have to act to protect themselves.

There is today a booming market in local vegetables (such as Rudhe/Ulude and Mutsine/Umhlavangubo (Shona/Ndebele)– ‘weeds’ from fields mostly), as well as local medicines. Hot teas of many sorts – lemon and ginger, guava and eucalyptus, soaked onion – are combined with steaming using a variety of herbs. Herbs, roots and tree products such as Ndorani/Intolwani, Rufauchimuka/Umafavuke, Zumbani/Umsuzwane and Chifumura are hot commodities, and lemons are reportedly selling for 20 bond notes a piece.

As people explained, they cannot get to town for conventional medicines, and in any case they have no money, so local approaches are better. They point to cases where people have recovered using such medicines. WhatsApp group messages are full of advice on local herbal medicines, and offers of their sale.

What then of the prospects of a vaccine? Here there is a raging debate across our sites. When asked, most people seemed highly sceptical. The Chinese have offered vaccines to the country (to be available free, despite early confusion), and this has been widely trailed in the press, as part of China’s effective vaccine diplomacy. While in time there will hopefully be allocations from COVAX, the central global facility too, it’s the Chinese vaccine offer that seems to be generating the most debate.

Where does the scepticism come from? In part it emerges from (usually unfair and often racist) attitudes towards Chinese interventions in Zimbabwe and the quality of Chinese products, disparagingly referred to as ‘Zhing-Zhong’ – cheap, low quality products likely to break or be useless. People also worry that the state will force people to have the vaccine.

There are also rumours that vaccines cause infertility, make women grow beards and have other severe side-effects, potentially resulting in death. It is difficult to know where such rumours come from, but they are very real. I was sent a whole string of videos (mostly coming from anti-vaxxers and others in the US) by a friend who had received them from a church-based WhatsApp group. There are likely many similar ones circulating.

Amongst our informants across the study sites, there was a general unease about the rapidity of the vaccines’ development – pointing out of course that there is still no vaccine for HIV/AIDS after many years. There was also a sense that, among poor rural people, they have not been affected so far, and that the local medicines and remedies being used seem to be working so far.

As across the world, vaccine anxiety mixed with vaccine nationalism will be a big issue for Zimbabwe when vaccines finally come to the country.

Combined with the flood of migrants from South Africa coming back over the festive period, there were many press reports of the elite partying unprotected and churches gathering in large numbers. The consequences are now being felt with the current surge. For good reason, the government has clamped down on the strong advice of the medical professionals. Since Jan 2nd there has been a strict ‘Tier 4’ lockdown across the country, recently extended for two weeks until the middle of February.

People report that this is the strictest lockdown yet, with severe movement restrictions, a curfew and business hours restricted from 8am to 3pm. Many arrests have been reported and once again there are accusations that the lockdown is being used to suppress political dissent. In the past, people could flout the rules or get round them – especially if you could bribe the police or were well-connected. Some are still able to get round the lockdown restrictions, but many fewer this time. There are shebeens (drinking places) that operate after dark, some transport operators that dodge the police road-blocks and a few churches still flout the rules, but for most the elaborate process of getting exemption letters is a daily struggle. One of our colleagues explained how he had to get an exemption letter locally in the township in Masvingo to get another exemption letter in town to travel to Chiredzi so he could look after his sugar farm. It’s not easy being a farmer at the moment.

The informal markets and many shops remain shut. Getting farm inputs is nearly impossible as movement restrictions and curfews mean many businesses have closed. Farmers cannot move their produce, and horticultural produce is rotting in the fields. Those who used to rely on vending of agricultural products at fixed locations have to move around or sell from home, with far reduced returns. Input supplies for farming have dried up – with fertiliser being absurdly expensive (up to US$40 per bag) and much in demand because of the heavy rains this year. The rains have resulted in livestock disease outbreaks, notably blackleg, but getting access to medicines is difficult because of movement restrictions, and cattle are dying in numbers. Despite it being a good season overall, especially on heavier soils, gaining the advantage of this is proving tough, both in terms of production and marketing.

With the good season, there are at least some early crops. Cucumbers, pumpkins, sweet reeds and early maize are already being consumed, along with the proliferation of local vegetables and wild fruits that have grown this year. This is a major help to many. Those who planted early look like they will get a decent crop in most of our sites, including those that are traditional ‘drought prone’. But late planted maize is currently looking weak and, with the lack of fertiliser and incessant rain, much of it is yellowing.

Even the COVID economy discussed in previous blogs is highly constrained at the moment. There is very little money circulating and people must get along with their own production and barter exchange. The growth of farming in town is dramatic – the outskirts of Masvingo are reported to be ‘one big farm’! Sugar beans or sweet potatoes with maize seem to be the favoured crops, and these will be keeping many people fed in the coming months.

Those who have some crops can exchange for other goods in their neighbourhoods. Barter is the basis for exchange without cash, and word is put out on the street or via the WhatsApp groups if things are available or needed. Goods are moved around the townships by a proliferation of push-carts, operated by many who have lost their jobs. And with the informal markets closed, selling has moved to people’s homes or mobile shops – in carts, wheelbarrows or cars – linking informal township-based wholesalers (who source for other towns or abroad) and a network of small-scale retailers and vendors.

As we have discussed before, there has been a massive growth of small-scale mining across our sites. In the last few weeks, two new areas have opened up near Masvingo and adjacent to our study sites, with now thousands of miners arriving in a new gold rush. Many underground mines have been flooded with the heavy rains, and some are now dangerous, but mining continues in others, often with serious attendant dangers – not only of mine collapse, but also of COVID-19 infection.

COVID-19 is certainly an unequal disease, but in unpredictable ways. In Zimbabwe, it affects the rich and powerful disproportionately through illness and death and the poor through livelihood struggles during lockdown. How will the inequality virus’ evolution pan out over the coming months? Check out the blog for further updates.

Thanks to the team in Mvurwi, Gutu, Wondedzo, Masvingo, Matobo and Chikombedzi.