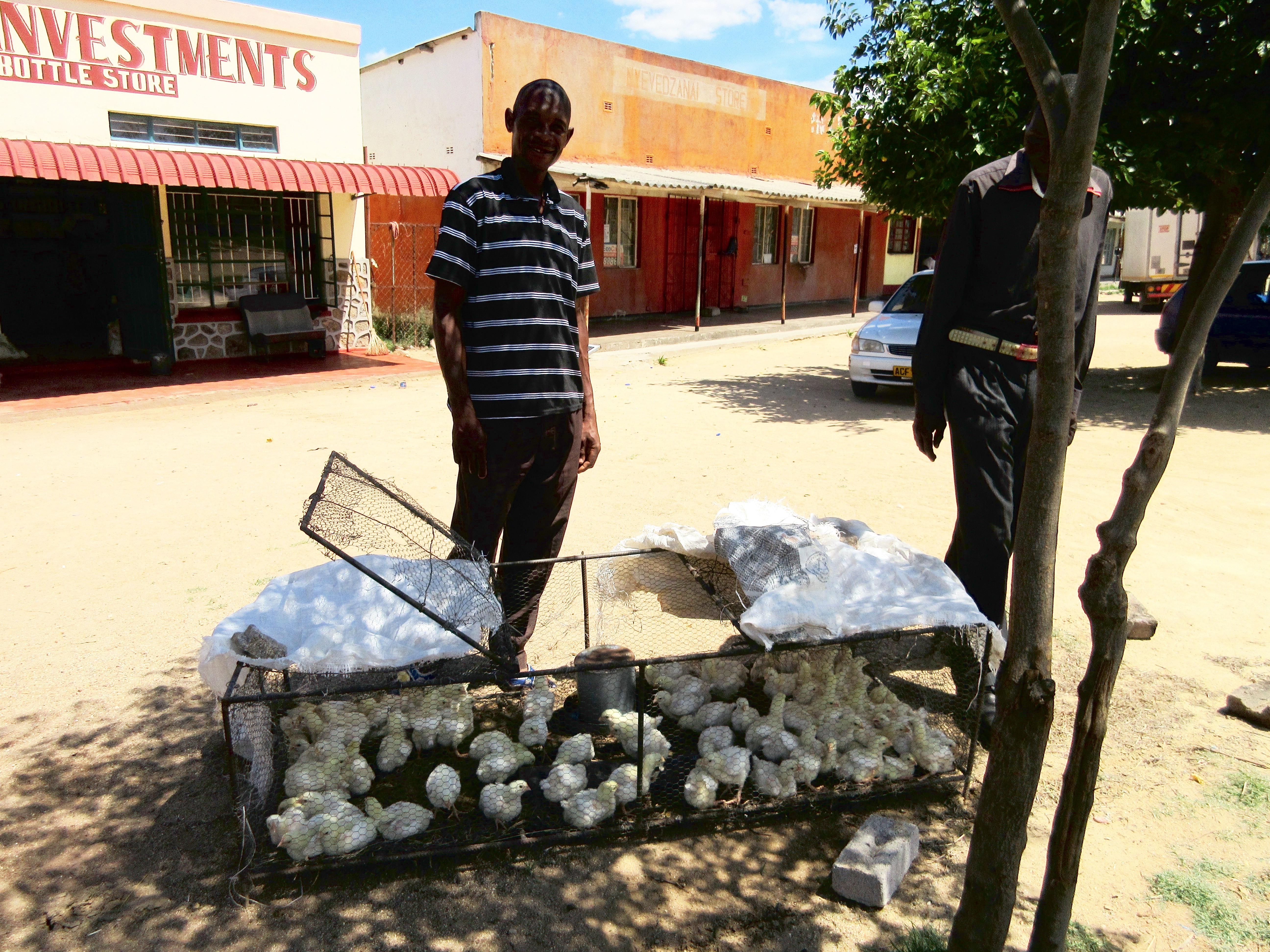 With low agricultural output, off-farm work is an essential complement to agricultural production in Zimbabwe’s communal areas. Working away has always been part and parcel of communal area livelihoods; indeed these were established as ‘labour reserves’ in the colonial era.

However, the patterns of labour migration have changed significantly over the past decades. Gone are the days of a stable job in town (or in the mines or farms), sending of regular remittances, and later retirement, with a cattle herd built up and enough land to subsist on. Following the retrenchments of the 1990s and the economic collapse of the 2000s, the wider economy is much less reliable. Jobs tend to be short-term and precarious, if they exist at all. Migration out of the country is an option, and has been taken by some, mostly to South Africa, but also to Botswana and the UK. Immigration restrictions and xenophobia are the risks migrants face in these longer migrations, even if the returns are better and more reliable.

Across our sample, we see reliance on migrant labour and remittances highest in Mwenezi. This is where agriculture is most unreliable, despite the study period’s results, and traditions of cross-border migration to South Africa most established. The recent jobs sample households mentioned included: game tracker, game guard, Illala palm products/basket making, Hippo Valley worker, builder, carpenter, well digger and herbalist. Most of these jobs were local, and linked to the economy in the area, including the national parks and the sugar estates near Chirdezi. Working in the estates was a more common feature of the households in Chivi, who included cane cutters, estate workers, security guards, drivers and others. Tour guides in local conservancies were also noted. Building, as in all areas, was a common profession, usually for local contracted work on a self-employed basis. Storekeepers were common too in Chivi. By contrast to Mwenezi, which is quite remote, in Chivi there were more teachers, police, soldiers and other government workers mentioned. This reflects the more established educational systems in the area, and so access to jobs requiring qualifications. This was definitely the case in the two Gutu sites. In Gutu West there were a large number of teachers and those with government jobs, again reflecting the (mission) education in the area over a long period. There were also bus conductors, security guards and self-employed local builders. In Gutu North, the majority of off-farm work was of this type, with builders, guards, drivers and a variety of business people, including shopkeepers, noted.

Overall, the data show that 25-57% of households had someone employed elsewhere. With the exception of Chivi, half to three-quarters of household heads were either currently employed or had been so in the recent past. Remittances were received by more households in Mwenezi (57%), but only between 11% and 21% of households received regular remittances in the other sites; a figure way lower than recorded in the 1980s and 90s. Again, other than Mwenezi, surprisingly few younger household members (aged 21-30) were in employment elsewhere. Those in Mwenezi joined the border-jumpers to South Africa, sometimes via Mozambique, whereas others were stuck at home, suffering the consequences of the poor state of the economy and lack of jobs. A predicament of many young people in rural areas, as our recent paper showed.

In the communal areas, levels of employment and reliance on remittances has historically been high. Studies in the 1980s put it as high as two-thirds of households receiving a significant proportion of income from remittances. With the decline in the wider economy this is now much lower and, although we didn’t ask about the figures, the amounts and regularity of remittance income has definitely declined. Nevertheless, reliance on off-farm employment, locally, within Zimbabwe and in other countries, is higher than seen in the nearby A1 resettlements, especially in the wetter areas where agriculture is profitable. In the Gutu and Masvingo district A1 areas remittances were only received by 7% of households in 2011, for example.

Access to education has historically been essential in gaining better-paid and stable jobs, such as those in government service. Since 1980, the ‘born free’ generation benefited massively, and before that the areas with mission education (such as via the Catholic and Methodist churches in Gutu) have been well educated. But with the decline in formal jobs, the collapse of pay in public service and periods of hyperinflation, the benefits of employment have dramatically declined. Better to set up your own business as a shopkeeper or builder than rely on formal employment. That younger household members in the 21-30 age group are barely working (outside the border jumpers of Mwenezi, which of course is dangerous and precarious) is witness to the collapse of the old livelihood strategies in the communal areas.

Given the limitations of agriculture, livestock keeping and formal employment, people must resort to other activities to earn enough. The table below shows the range of income earning activities recorded in the year before the 2017-18 interviews. It shows that poultry and vegetable sales are important for a good proportion, along with trading, especially in Mwenezi (near international borders) and Gutu North. Livestock related sales are important in Mwenezi, as discussed in an earlier blog.

Gender differentiation of tasks is evident across these activities, with vegetables and poultry largely the domain of women, as are a range of the other activities noted (including basket weaving, pottery etc.). Livestock sales are led by men, as are other activities such as building, carpentry, brick-making and transport provision. However, gender roles are not fixed and, with lack of jobs elsewhere, men and women are much more flexible about roles. Young men for example will garden, trade and sell chickens, unheard of in previous generations.

Natural resource-based activities are important, but these are concentrated in Mwenezi where plentiful resources still exist. Fishing, woodcarving, and wild food harvesting are important. This includes (illegal) hunting and collection of the famous mopane worm, which both are important activities in the Lowveld. None of our areas are serious gold panning areas like other parts of the country, but a few travel to nearby rivers to try their luck. None of this is seriously remunerative: enough to supplement but not survive, and in the case of the Chivi and Gutu sites, relatively few households engaging. Again, this is a sharp change from before when natural resource-based incomes were much more important.

As the data on off-farm income earning shows, today diversification is all, and many communal area households have multiple streams of income, often with small, infrequent, uncertain amounts. This is much more stark than we see in the A1 resettlement areas, where, for most, agricultural incomes make up the bulk of livelihood support. For a significant group – perhaps 30-40 percent of households – agricultural surpluses generate investments that allow for further income to be made. In contrast to the resettlements, incomes derived from house rentals, shops or transport services are minimal in the communal areas. Instead of new businesses being established on the back of agriculture, people are scraping a living, hiring out labour and using natural resources.

Farm labour: a big contrast with the resettlements

On-farm labour has really taken off in the resettlements. With larger plots of land, the demand for labour is high, and those without resources to invest in their own land often hire out labour. This is often more than the occasional bit of piecework; there are quite a few permanent jobs, often involving a mix of tasks, including herding, housework etc. This is not evident in the communal areas, as the table below shows.

There is very little agricultural labour employed, beyond some occasional temporary labour from the very few who are able to invest in agriculture (male in Mwenezi and female in Gutu North), but not from many households. This is in contrast to the nearby resettlements where, across our A1 sites, farm employment rates are much higher, with, in 2011, 17% of households employing permanent workers and 12% of households employing temporary workers. In Chivi and Gutu West a certain amount of piecework (maricho) is recorded, but this is very occasional, and not regarded as employment.

In other words, the patterns of class differentiation seen in the resettlements – between for example petty commodity producers and worker-peasants and semi-proletarians – is not observed to the same extent in the communal areas. There simply isn’t the productive base for surplus extraction and the formation of a worker-peasant/proletarian class. Unlike the studies from the 1980s that showed such patterns in the communal areas, we see much more of a uniform pauperisation of struggling households, who are mixing diverse forms of ‘work’ (rarely ‘employment’ or ‘jobs’), with limited, low productivity agriculture. This is not a classic self-sufficient peasantry, nor do we even see many emergent petty commodity producers – the hurudza; instead we see what Henry Bernstein describes as the ‘fractured classes of labour’, struggling to make a living.

Life in the communal areas, with limited land and poor job prospects, is increasingly precarious. Reliance on aid is important, and this rises from the drier Mwenezi to the wetter Gutu. NGOs and government programmes exist, but this is always hit and miss and not a way to survive. Making a living in the communal areas, with limited agricultural opportunities, is certainly tough. It is no surprise that, when our research partners in the A1 resettlement areas reflect on their lives, they are certain that they have improved, despite the hard work of getting established. Indeed, it is not only the state and NGOs that provide aid to the communal areas, there are significant flows of food from the resettlements to the communal areas that keep relatives, friends, fellow church members and others going, reflective of a new rural moral economy of the post land reform and economic crisis era.

It is these social relationships – with areas and between them – that are crucial when thinking about how agriculture is practised and economies function. The next blog discusses the social institutions at the heart of communal area life, contrasting this with what is found in the more recently established resettlement areas.

This post is the sixth in a series of nine and was written by Ian Scoones and first appeared on Zimbabweland.