Beyond impressive results: Are we ready to act? 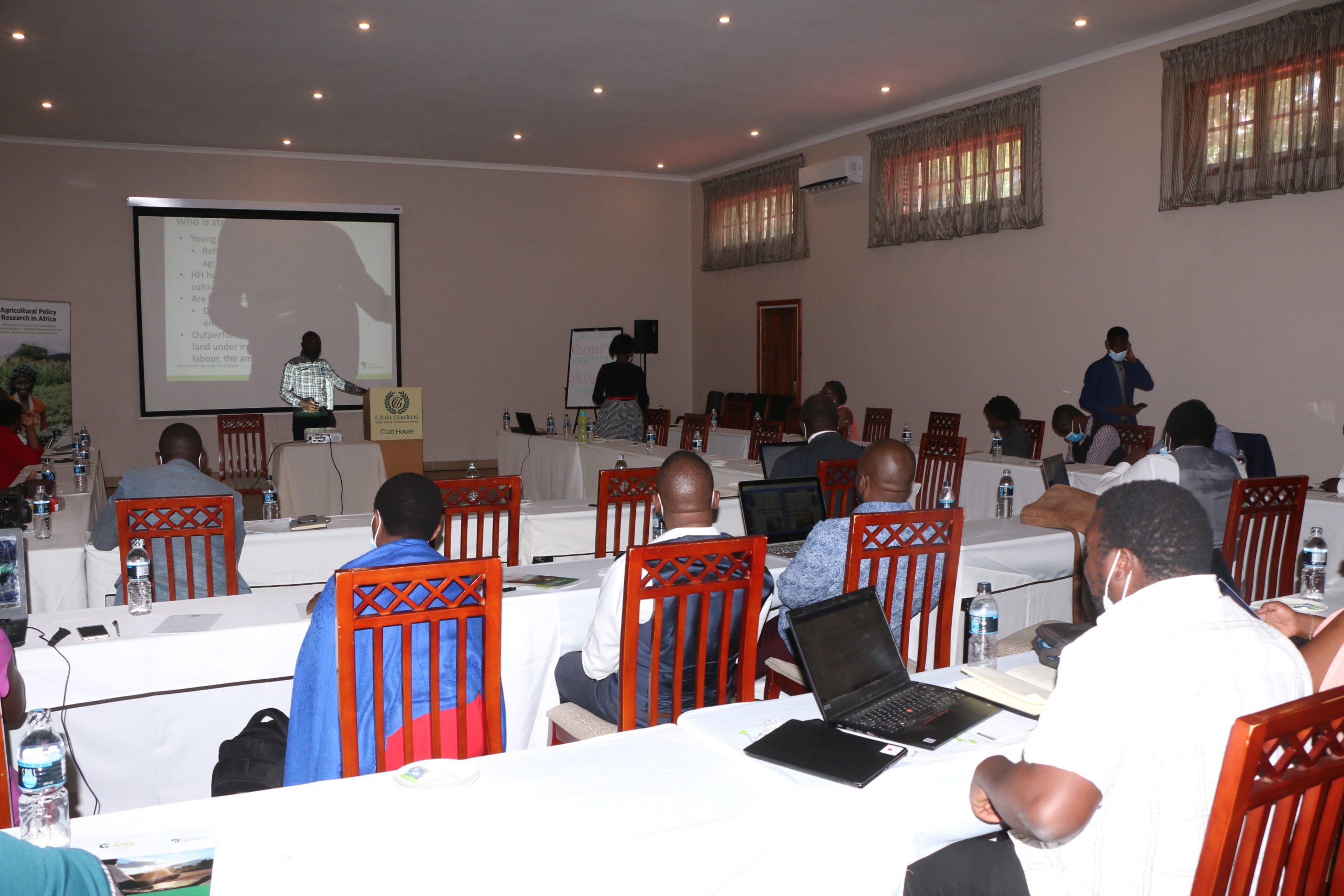 In its efforts to disseminate the results of a five-year research project, the APRA Malawi team held a national dissemination event at Ufulu Gardens in Lilongwe on 30 November 2021. The event brought together stakeholders from government, donor, civil society, media and research and academic institutions working in the realm of agricultural commercialisation in the country. At this event, the team shared results of a longitudinal tracker study of agricultural commercialisation and livelihood trajectories in Malawi. More information on this event can be found in the first of this two-part blog series, here.

Design of the study

The study that served as the foundation for this event was carried out in the districts of Mchinji and Ntchisi in central Malawi with particular focus on groundnuts. This study tracked households that had been interviewed in the 2006/07 growing season and surveyed them after a ten-year period in order to understand their experiences with regards to the processes of agricultural commercialisation. In this exercise, the survey extended to households that had branched out from the original households, as long as they were living independently and living in Malawi. This extension allowed us to understand how original households had influenced the branched-out households’ livelihood trajectories, and vice-versa, through agricultural commercialisation.

Findings of the study

Prospects for agricultural commercialisation are relatively higher for households that are stepping out, stepping up and stepping in. These are, however, very few; the majority of households are currently either hanging in or dropping out.

There is a possibility for stepping out, stepping up and stepping in households to commercialise their agriculture on a sustainable basis, but they are constrained by a ‘triple crisis’ of land, productivity and marketing exacerbated by highly gendered social dynamics. Therefore, smallholder agricultural commercialisation is possible, but it is highly constrained by the contemporary agrarian set-up underpinned by this triple crisis. Female-headed households are particularly constrained by multiple deprivations and disadvantages that make it very difficult for them to benefit from bridging social networks that are critical in achieving agricultural commercialisation.

Participants described the APRA results as insightful, novel and practicable to give the commercialisation agenda a new lease of life. Some participants enthused that, “these results are quite timely; they provide concrete and practical entry points for pushing a viable commercialisation agenda among smallholder farmers… it is a must that they should be shared with the National Planning Commission.” Further, another attendee explained that, “policymakers in government, parliamentarians and non-governmental organisations including donors must engaged on the results; they would give the commercialisation agenda a new meaning and lease of life, especially since it is the first pillar in the Malawi Vision 2063.”

Stakeholders debated whether or not the country is ready to act decisively so as to translate these findings into tangible outcomes. While the results are quite novel on the smallholder commercialisation frontier, stakeholders reiterated the perverse bureaucratic incentive structure that presents obstacles to embracing new insights, let alone along pursuing them to their logical conclusion.

In this debate, the discussion on marketing constraints particularly caught our attention. There is no doubt that marketing is a fundamental constraint to smallholder agricultural commercialisation and, as such, addressing issues in the marketing system would require dismantling entrenched cartels.

For example, the groundnut export market is an obstacle in the establishment of a viable and widely accessible groundnut market. Operating in two centres, Mgona in Lilongwe and Mwansambo in Nkhotakota, the gatekeepers of the market are foreigners, predominantly from Burundi and Rwanda.

The main question among participants was how are markets that are blatantly illegal and exclusively controlled by foreigners allowed to operate? These informal markets have norms and traditions that are widely understood by all operators, but work to the disadvantage of smallholder farmers.

Local processors, predominantly owned by Malawians of Asian origin, constitute another obstacle that undermines efforts to establish structured markets. The vendors that constitute a market for smallholder farmers are infamous for their unscrupulous business practices, partly motivated by their desire to maximise their commission.

Profiles of most vendors, indeed, raise questions about where they get their capital from. According to the participants, vendors are financially empowered by the aforementioned Malawians of Asian origin who dominate the local processing industry. In turn, the political elite offer them lucrative contracts to supply food requirements for all government institutions, undermining efforts to create a viable alternative marketing framework to the Agricultural Development and Marketing Corporation.

The positive reception of APRA results by stakeholders is pleasing, especially the consensual recognition of the results’ potential to have a transformative impact on the country’s commercialisation agenda.

The main task remains to create an enabling environment to either overcome or navigate the perverse bureaucratic incentive structure that often impede taking, let alone following, policy action to its logical conclusion. The challenges around marketing exemplify the enormity of the task, but it is not insurmountable with the help of systematic and consistent engagement with key decision-makers and stakeholders in the agricultural sector over time.