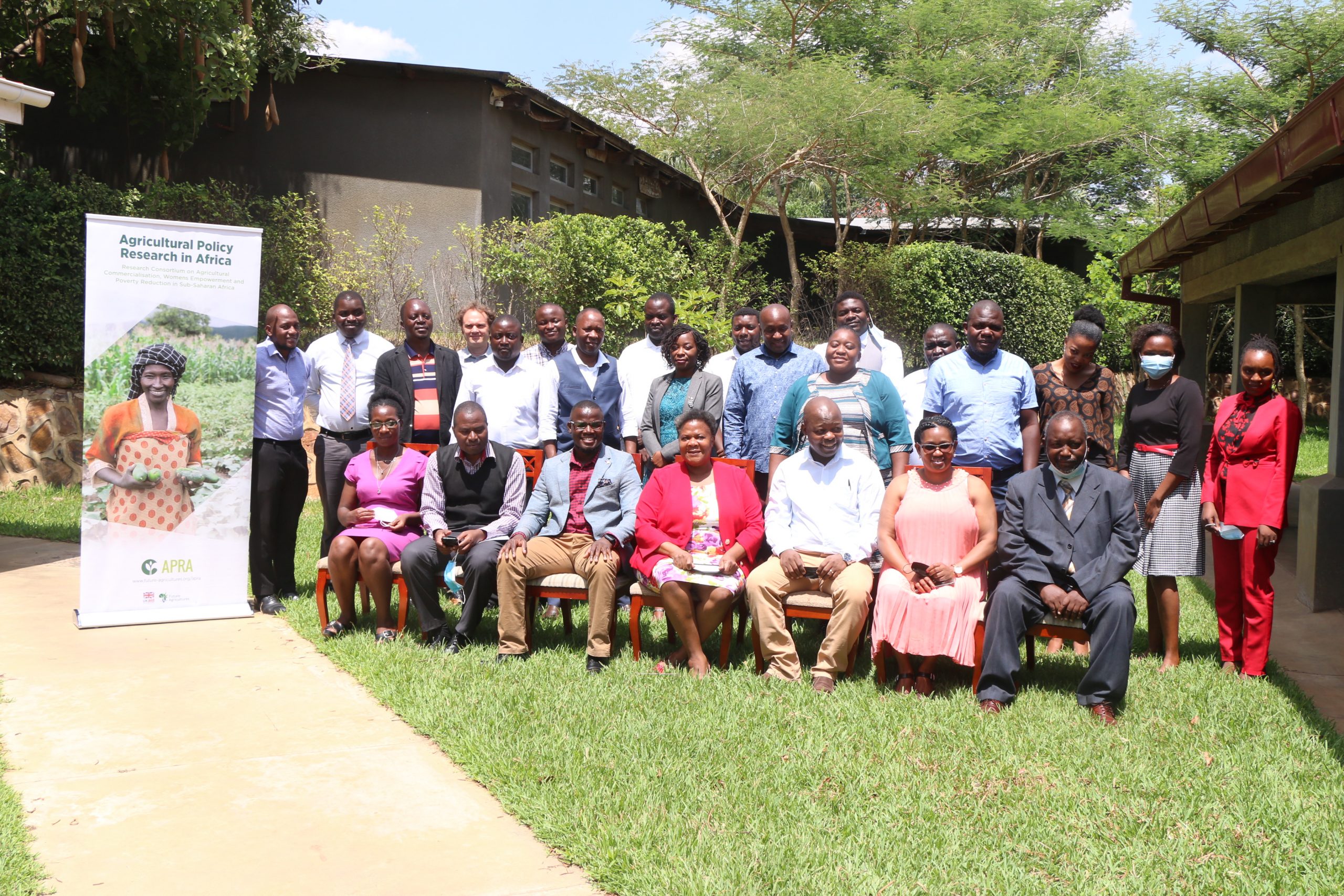 Since 2016, the APRA Malawi team has been working to understand the underlying factors of smallholder commercialisation in the groundnut value chain in Mchinji and Ntchisi. Now, following the publication of their research findings, the team is turning its attention to dissemination efforts to share these critical findings with those most impacted by them. In this campaign, APRA Malawi researchers Blessings Chinsinga and Mirriam Matita presented findings to 29 stakeholders from the government, non-governmental organisations (NGOs), civil society networks and additional stakeholders at a national dissemination workshop on 30th November 2021. Among these attendees, 10 were women and 19 were men.

The researchers’ key finding, as presented at the dissemination event, was that there is limited viability of smallholder agricultural commercialisation in rural Malawi. They also concluded that agriculture is no longer an independently reliable source of livelihoods; in other words, smallholder farmers must diversify their sources of income using both farm and non-farm enterprises to survive. Further, in the absence of input subsidies very few farmers can afford productivity-enhancing inputs, which culminates into a productivity crisis where the output per hectare is very low. These effects are exacerbated even more so for women as a result of poor access to functional markets and persistent gender gaps. At the end of the presentation, they concluded that agricultural commercialisation is possible, but it is constrained by the contemporary agrarian set-up characterised by policies that are one-size-fits all in nature and thus not delivering the desired results.

Following the presentations, the participants were given an opportunity to reflect on the research findings, ask questions, and provide feedback on the results. Some of the frequently asked questions were related to how we can enhance smallholder farmers’ production and the role of agroecology in achieving this. Others reflected on how to restructure produce markets for the benefit of smallholder farmers. This became a critical point, as some participants observed that, “the markets are there; but what matters is the kind of market…” Many markets that currently exist are exploitative, manipulative, and restrictive, and in some cases, only key players with connections to political entrepreneurs can access them. This exclusivity further marginalises smallholder farmers.

One participant, Grace Mijiga –  the Executive Chairperson of the Grain Traders Association, explained that input capital financing through private sector participation could be accompanied by policies that protect the investor, especially given the practice of side-selling by farmers on contract to vendors. The meeting also noted that there seems to be a ‘shadow private sector’ – which tends to exist temporarily for the purpose of getting large government contracts but disappear afterwards – in Malawi, that is largely driven by incentives foreseen in state activities which sometimes undermine the sustainability of private sector actions in agriculture. For example, a corporation would get subsidy contracts to supply fertiliser under the government subsidy programme, but not exist beyond that. An official from the Farmers Union of Malawi, Derrick Kapolo concurred with the suggestion, noting that during planting season there is largely no private sector supporting farmers with production [except those selling seed/fertiliser products], and yet at marketing time they flood rural markets to purchase farm products … and complain about the quality of products. Despite this situation, the private sector fails to take the responsibility to sensitise the farmer on the required standards in the value chains where they forward the products.

Workshop participants in the plenary discussions made several suggestions:

In conclusion, the participants thanked APRA for sharing the findings and recommended that the issues be escalated to other national platforms with appropriate messaging, as well as community radios which can be used to inspire listeners to take action towards greater agricultural commercialisation. Other participants pledged to continue dialoguing on the results in their networks. Blessings closed the meeting with a remark that the results have generated insights and debate that was rich and will broaden further analysis. Gratitude was extended to all those in attendance, as well as the UK Foreign Commonwealth and Development Office for supporting the research in Malawi.

Marah Limani is a graduate of the University of Malawi with a Bachelor of Arts degree in Humanities.