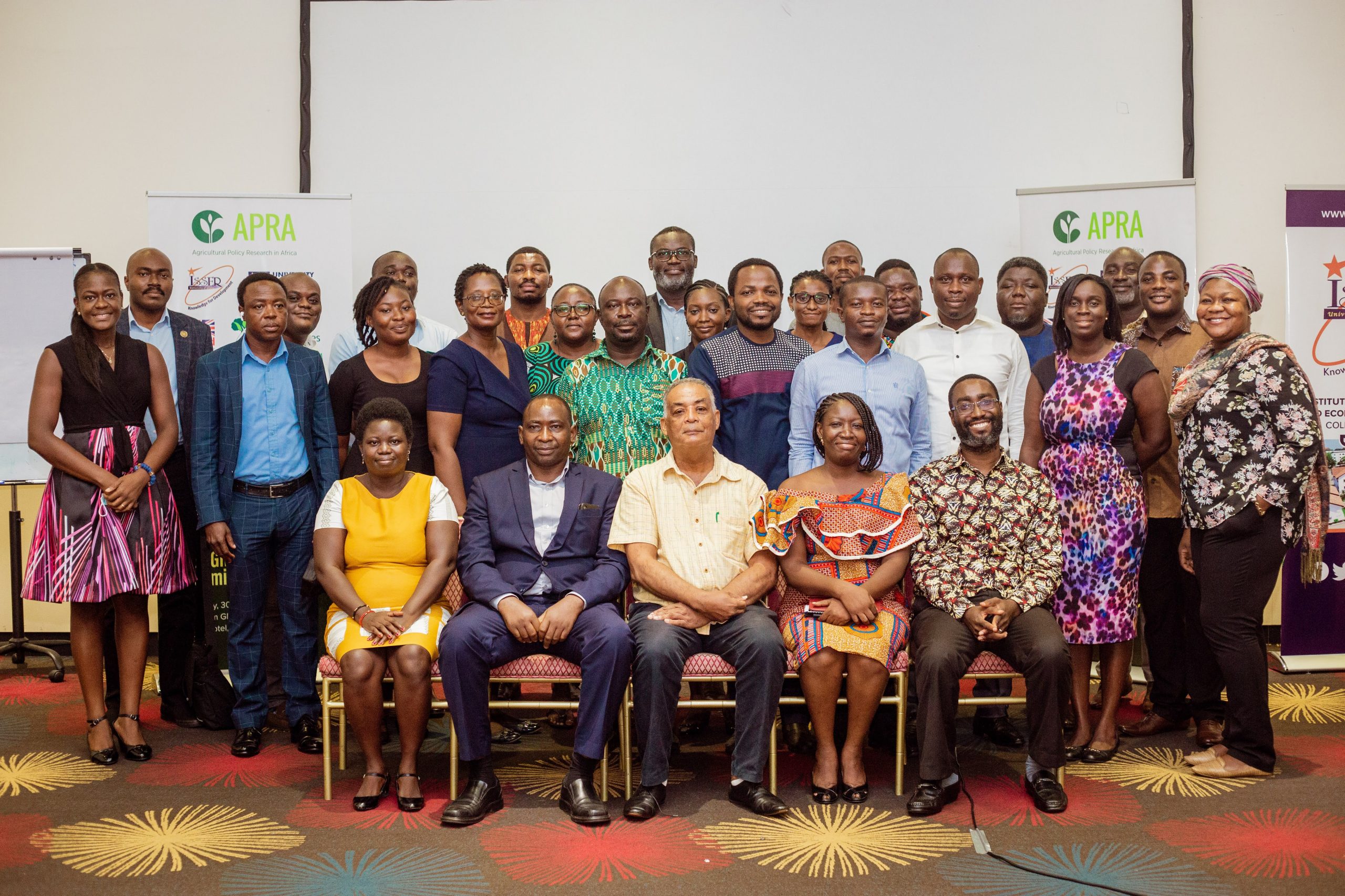 Together with stakeholders from public and private institutions countrywide, the APRA Ghana family gathered at ALISA Hotel in Accra to discuss the key findings emerging from three streams of APRA studies since 2016. Historically, cocoa and oil palm have remained Ghana’s major export crops, providing employment for the country’s burgeoning labour force, contributing about 3% to its GDP, accounting for between 20-25% of total export receipts, and supporting rural livelihoods across the forest belt of the nation. In addition to rubber, oil palm and cocoa remain the most commercialised crops in Ghana. Throughout the research, the team sought to understand the welfare outcomes of the choice of output commercialisation channels adopted by farmers.

Discussing the findings at the event, Prof. Joseph Yaro, APRA’s West Africa Coordinator, highlighted APRA’s research activities in Ghana and in the sub-region. He further emphasised that the overarching objective of APRA studies in Ghana is to investigate the pathways to agricultural commercialisation that have been most effective in reducing rural poverty, empowering women and girls, and improving nutrition and food security. Prof. Yaro indicated that APRA’s research in Ghana falls into three workstreams – Workstream 1 (WS1) which examines the outcomes of different types of commercialisation and analysing people’s selection choices and their outcomes; Workstream 2 (WS2) which explores longitudinal change over time and identifying different pathways of agricultural commercialisation and their outcomes; and Workstream 3 (WS3) which analyses key policy issues associated with changing patterns of agricultural commercialisation through six focused, multi-country, policy studies.

In attendance at the workshop were stakeholders in Ghana’s cocoa and oil palm sectors including officials from Ghana Cocoa Board, Ghana Tree Crops Development Authority, and the media. The event was widely reported in the Ghanaian media, including in Graphic Online, Business & Financial Times, and the Ghanaweb News Portal.

What are the key findings from APRA’s studies in Ghana? Presenting the key findings from WS1 studies in Ghana and their implications for policy and practice, Dr Fred Dzanku, APRA Ghana Coordinator and the research lead for the WS1 studies, announced that among four* key oil palm commercialisation channels identified in southwestern Ghana, farmers who process their own oil palm reported better welfare outcomes and are happier. Similarly, better welfare outcomes were reported by farmers selling directly to oil palm companies. Yet, farmers who sell output to companies through agents were the unhappiest and most discontented due to the breakdown of trust. He observed that smallholder farmers in the study area are very responsive to market incentives with high levels of specialisation in non-food cash crop (oil palm, cocoa, and rubber) production. Dr Dzanku concluded that oil palm commercialisation in southwestern Ghana is constrained by structural and institutional factors such as limited ability to participate in better remunerating markets, poor land tenure arrangements, poor road networks and unavailability of farmer associations. Assessing the role of policy in promoting oil palm commercialisation outcomes in Ghana, Dr Dzanku proposed that the acceleration of public-private partnerships for rural agro-industry development, farmer training in cooperative organisation and management, rural infrastructure development (e.g., roads and oil palm processing equipment), and policy continuity are key to success.

Next, Prof. Kojo Amanor, the research lead for the APRA WS2 study in Ghana presented the key findings on long-term changing patterns of cocoa production in Ghana; farmers’ access to land, labour and technology; environmental impacts of cocoa through time; and the changing costs and challenges that farmers experience in cocoa farming. Prof. Amanor enumerated the key findings as follows. First, the cost of cocoa farming (in terms of land, labour, and inputs) has increased significantly while international prices remain generally poor and volatile. This results in declining profit margins, relatively high input prices, and increasing strains on large numbers of farmers to intensify production with high inputs. Additionally, deforestation results in increasing costs of production, and the vulnerability of cocoa to disease and pest infestations.

According to Prof. Amanor, attempts to promote sustainability in cocoa production and maximise welfare outcomes should include the creation of more diverse agroforest crops with different income-generating products to hedge risk against fluctuating prices; focus on raising incomes rather than maximising yields; enhanced land tenure security for farmers; and more flexible production and marketing strategies with various options for different categories of farmers.

Discussion of APRA Ghana research findings were further enriched by a Q&A session and discussant comments from experienced practitioners in Ghana’s oil palm and cocoa sectors. First, responses from Mr Kwasi Baah Ofori (Planation/Estate Manager of Benso Oil Palm Plantation) and Dr Richard Asare (International Institute of Tropical Agriculture Country Representative) largely confirm the key findings of APRA’s WS1 and WS2 studies in Ghana. For instance, Mr Kwasi Baah Ofori affirmed that there are huge challenges reaching oil palm farmers through the company agents in southwestern Ghana. He emphasised that the role of agents has become critical to the operations of oil palm processing companies, as the companies cannot directly reach most farmers due to the fact that small-scale farms scattered in widely dispersed small communities with poor roads. He further highlighted the breakdown of trust in the oil palm economy in southwestern Ghana. This was followed by some debate and diverse reflections from participants. While some participants consider farmers’ accusations of cheating against agents as misconceived, others believe such allegations should be thoroughly investigated by the oil palm processing companies to restore trust among actors in the sector. Some suggest that the use of electronic scales to minimise cheating. Others further suggested that, as it is for cocoa, farmgate prices should be announced for oil palm at the beginning of the harvesting season.

Key messages for policy and practice include the need for Ghana to focus on public private partnerships (PPPs) as the best pathway to agriculture commercialisation. PPPs have the potential to effectively link up the agriculture and the manufacturing sectors, which are labour intensive and therefore hold greater promise to reduce unemployment. By this, the country has the chance of reducing unemployment through PPPs that goes beyond the government’s One District One Factory initiative. Collective action by farmers would also yield greater welfare outcomes. There is the urgent need to create more diverse agroforests with different income-generating products, including fruit trees such as cola and non-timber forest products, to mitigate risks of fluctuating prices. Further, there is a need for government and policymakers in the cocoa sector to focus on raising incomes of cocoa farmers rather than maximising yields. Additionally, land ownership and acquisition for cocoa cultivation by young people under 30 who are interested in the commodity has become difficult, thus blocking their effective participation in the sector. Land policy reforms must immediately address this.