The political economy of cocoa value chain in Ghana 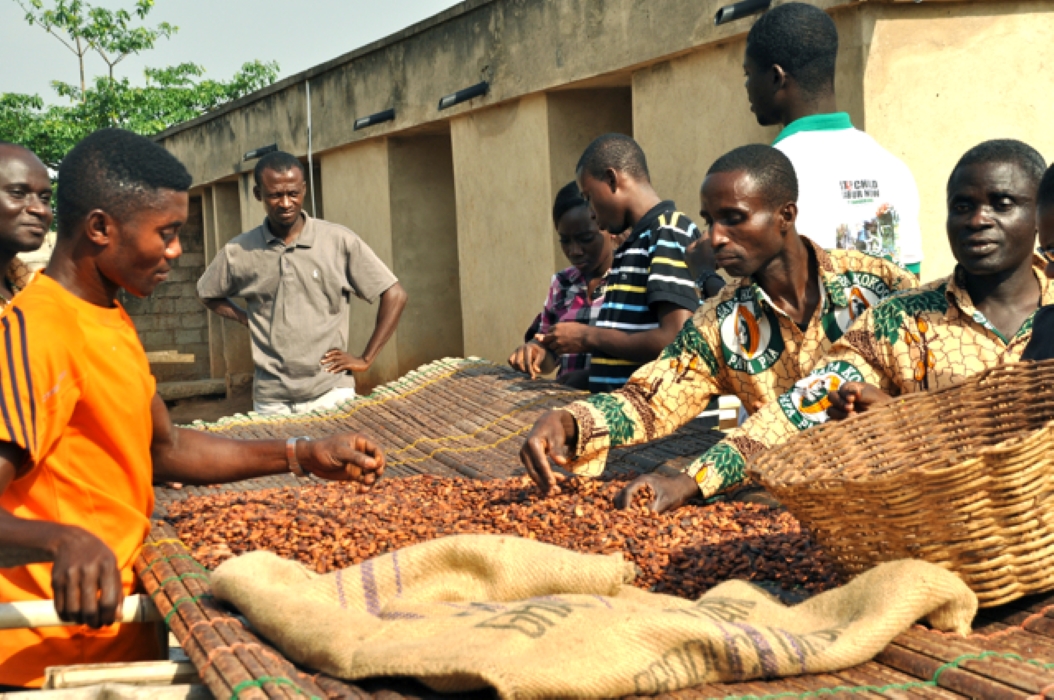 This blog presents the findings of APRA Working Paper 53, which adopted the political settlement framework to analyse the political economy dynamics of Ghana’s cocoa value chain. Researchers Joseph Kofi Teye and Ebenezer Nikoi discuss these findings, which indicate that policies implemented in this value chain have gone through several shifts in relation to changing agrarian political economy and distribution of power among interest groups, and highlight the steps that can be taken to harness the cocoa sector’s potential to contribute to economic development in Ghana.

Ghana’s cocoa sector has, historically, been the backbone of the Ghanaian economy. It contributes significantly to GDP, foreign exchange and employment. Aspects of the cocoa industry, such as input supplies to farmers and cocoa pricing, feature prominently in national and local politics. However, there are very few studies on the benefits that accrue to various actors in the cocoa value chain. This study found that successive governments have maintained control over the lucrative cocoa marketing segment, which has enabled them to distribute costs and benefits (rents) to actors in their patronage networks. The contribution of Ghana’s cocoa sector to socio-economic development is affected by tenure insecurities, inadequate labour supply, lack of accessible credit, shortage of farm inputs, climate change, income and gender inequalities and corruption in the cocoa sector.

Political settlement analysis of the cocoa value chain in Ghana

Consistent with the political settlement framework [i] interactions among various interest groups have created different rents for different actors in the cocoa sector. Policy development in the sector went through four periods. The first period (1920–1957) was the colonial era, characterised by a fairly corporate governance system and struggle between European traders and farmer cooperatives for monopoly over internal marketing of cocoa. The second period (1957–1980) was the early post-independence era with a state-controlled economy, characterised by neopatrimonialism and over-taxation of cocoa farmers to create rent for maintaining power. The third period (1980–2000) marked the introduction of economic reforms and liberalisation which were adopted in response to international pressure and economic crisis. While the reforms brought about a gradual increased in producer prices, they also contributed to rising costs of production to farmers as subsidies were removed. The fourth period (2000–present) is characterised by further liberalisation and public-private partnerships, and geared towards modernisation of cocoa farming, promotion of environmentally friendly farming activities, empowerment of women, and protecting the rights of children in cocoa growing areas. In reality, however, these partnerships have not yet significantly resulted in improved outcomes for youth, women, children and other marginal groups in the cocoa sector.

Although the government continues to fix the cocoa prices in this current era, prices offered to farmers since 2000 have been quite stable, as both the political parties which have governed Ghana in the last three decades have been using cocoa pricing to solicit political votes from farmers. Similarly, even though the cocoa sector has been liberalised, subsidies on fertilisers and agrochemicals have become a key political tool for ‘buying’ votes in since 2000. [ii]

Significant social differences exist across the entire cocoa value chain. Actors in the production segment, mainly farmers and farm labourers, are generally poorer than actors in the marketing and processing segments. There are also significant ‘horizontal’ social differences between actors even within the same segment of the value chain. In the production segment, for instance, large-scale cocoa farmers tend to be wealthier and have better chances of receiving technical and financial support from both the government and the private sector than young and smallholder farmers. Young farmers struggle to get sizeable financial grants because they generally do not have assets to serve as collateral. Vulnerable groups, such as women, the youth and migrants, also find it difficult to access farming land. [iii]

Challenges with the cocoa value chain

All segments of Ghana’s cocoa value chain are confronted with challenges that could significantly impact the sustainable delivery of cocoa to both domestic and international markets. Cocoa production is affected by tenure insecurity, shortage of labour, pests and diseases, and lack of access to credit, climate change, and inadequate inputs, especially fertilisers and agro-chemicals.

The main challenges in the internal marketing segment are poor transportation networks and low prices of cocoa beans.

Recently, the challenges in the cocoa sector have been exacerbated by the COVID-19 pandemic.  In the production segment, the closure of land borders has affected the supply of migrant labour from neighbouring countries. The pandemic has also affected farmers’ access to inputs, as some of the cocoa processing companies who depend on imported materials for packaging reported that, due to the closure of the borders, they were unable to access materials for packaging their products. These companies have also reported that the closure of the borders made it difficult to transport their goods to other African countries. The pandemic and associated lockdowns also affected the implementation of marketing and product promotion campaigns by some of the companies, as many events at which products are sold were cancelled.

While Ghana’s cocoa sector has the potential to contribute to economic development, there is a need to address various challenges, which include: tenure insecurities, inadequate labour supply, lack of accessible credit, shortage of farm inputs, climate change, social differences, rent seeking behaviours, and the emerging COVID-19 related problems.