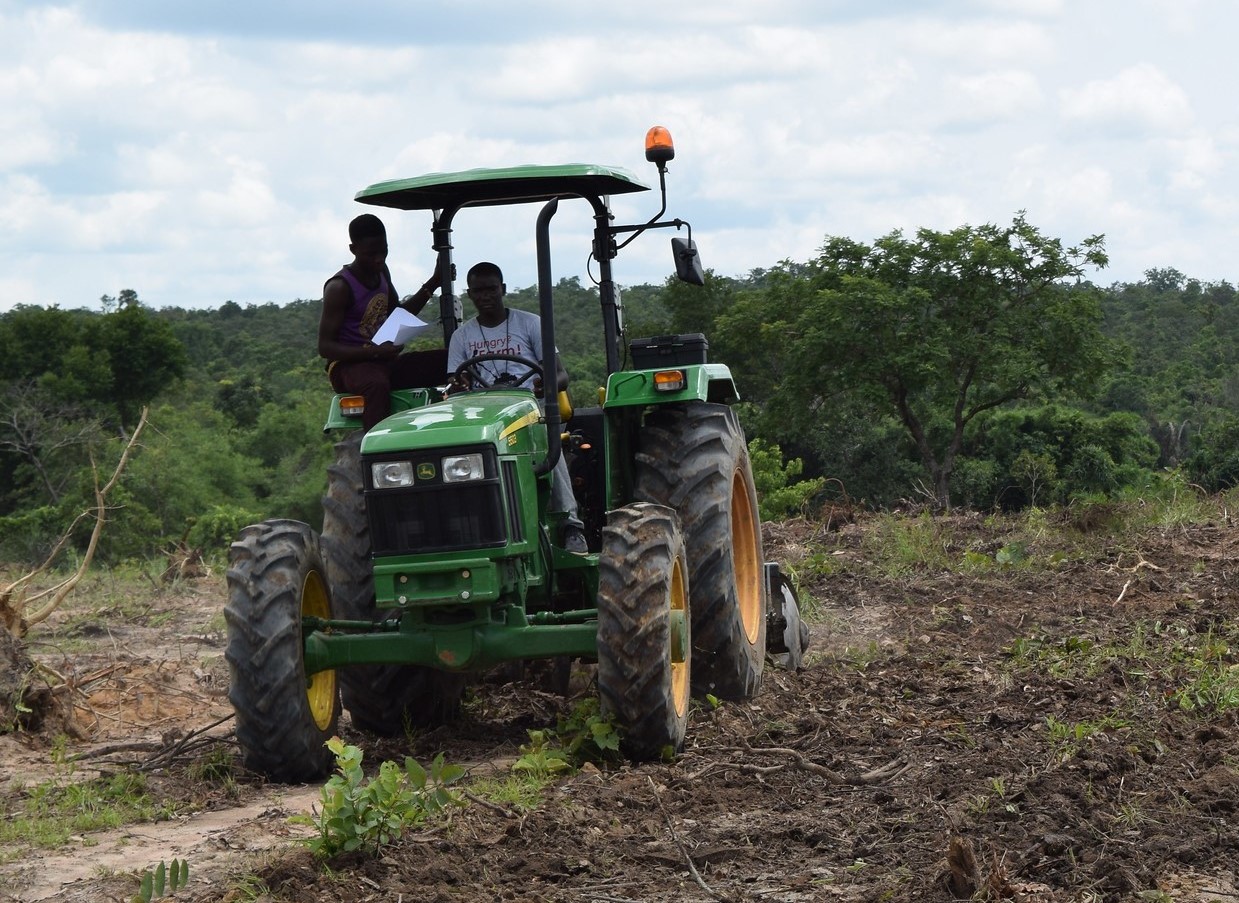 The agrarian question in West Africa is dominated by the integration of peasant agriculture or smallholder farming into agribusiness markets, which includes contract farming, but also other mechanisms to encourage uptake of inputs and the incorporation of farmers into corporate controlled food processing. Although there is a growing presence of medium-scale farms and acquisition of farmlands by foreign corporations, smallholders continue to be dominant in domestic and export crop production. This dominance does not mean agribusiness has a lesser presence in West Africa, but that the commanding agribusiness interests tend to prefer the integration of smallholders into markets rather than directly investing in large estate production.

A crop such as cocoa illustrates the scale of agribusiness reach in West Africa.  Up to about 80 percent of world cocoa production originates from West Africa.  Peasant farmers – rather than corporate interests – largely produce cocoa, but three transnational companies (Cargill, Barré Callebaut and Archer Daniel Midland) dominate global cocoa processing and trading, controlling over 70 percent of cocoa processing.  These multinationals have a large presence in West Africa and have established processing facilities, often in export-free zones.

In the Cote d’Ivoire, the largest producer in the world, these multinationals have taken over state marketing and processing facilities. In Ghana these multinationals work closely with the state and NGOs to establish control over the cocoa production chain, introducing certification schemes, child labour controls and gradually establishing control over the internal marketing.

Export crop production has a long history in West Africa, dating back to the early nineteenth century palm oil trade with Europe. During the second half of the nineteenth century groundnuts, cocoa, rubber and cotton emerged as major exports. These export crops were largely organised by an African merchant class allied with traditional rulers. Although colonial rule did not result in the expropriation of land to make way for a settler colonial agriculture, this did not mean that agriculture was not exploitative. Various forms of coercion were used to ensure that the peasantry produced cheap crops for export, including: the creation of a labouring class through forced labour; retentions and the reinvention of various forms of servitude within the system of colonial indirect rule, which were justified as being the cultural privileges of the ruling class; various forms of taxation for peasant cultivators that ensured their participation in export crop production; and, the deliberate creation of labour reserves in the hinterlands by preventing domestic forms of capital accumulation and industry emerging in these areas.

Under colonial rule there was minimal expenditure on agricultural modernisation through technological development. The main emphasis was on the extraction of surplus by merchant trading companies from peasant producers.  Although peasant producers dominated production, the export trade in agricultural commodities was characterised by very high concentration with three companies controlling 70 percent of the import-export trade.

Coercive relations of production, and perceptions of unfair prices for crops led to many grievances, which fuelled the anti-colonial independence movements. By the 1940s the edifices of indirect rule crumbled away, leading to a transition to independence. The lack of modern agricultural services within the African colonies failed to provide a support structure for dealing with the challenges of agricultural modernisation. This was exemplified by the crises of the swollen shoot disease in the Gold Coast cocoa industry in the 1940s and 1950s and the African maize rust epidemic in the 1950s, which decimated maize production.  These agrarian calamities highlighted the needs to create a modern agricultural research infrastructure in West Africa that could respond to local problems.

Colonial rule failed to encourage the emergence of an indigenous capitalist agrarian class. As a consequence, following independence the state took on the role of investing in agricultural production and creating a national agrarian class, often incorporating elements of the political class.  The US ideology of agricultural modernisation justified this development, with its emphasis on promoting ‘progressive farmers’, who were identified as having large-scale estate agriculture.

There were serious problems in adopting the Green Revolution technologies promoted by international development, due to the ecological and socio-economic conditions of West Africa. This was exacerbated by the climatic vagaries of the Sahelian drought of the 1970s and many of these attempts at agricultural modernisation were unsuccessful. The economic consequences of the recession of the 1970s compelled most West African nations to seek relief from the International Monetary Fund (IMF) and adopt structural adjustment programmes. Before economic liberalisation there were significant attempts to develop new agricultural initiatives better attuned to local conditions, such as farming systems research, which worked within national agricultural systems to adapt technology to the conditions of smallholder agriculture.

Transformations within the US economy in the 1970s-80s had large-scale implications for agricultural development in Africa. New market liberal policy initiatives pressurised African states to open their markets to foreign capital and agribusiness capital and divest state agricultural services. At the juncture in which state investments in agricultural research began make progress, such as in national seed production capacities, international pressures subdued the national agricultural research project.

While transnational agribusiness has acquired more lucrative agricultural enterprises, such as the Cote d’Ivoire state cocoa services, it has little interest to invest in in small national agricultural sectors. This has led to an impasse in many sectors in which pressures to privatise has not been met by purchasers and investment, resulting in the stagnation of enterprises, such as in many national seed sector agencies. Rather than purchase national seed companies, transnational corporations such as Pioneer Dupont have focused on acquisitions of the largest seed companies in Africa, including the South African company, Pannar. These companies are then used to penetrate the larger African market. As a consequence national agricultural research capacity has tend to stagnate and many of the promising new approaches of the 1970s have been shelved.

Other strategies involve financing and building networks of marketing corporations, distributors and NGOs to market inputs of transnational corporations and organise marketing. These third party agencies may be involved in organising farmer associations and other organisations to promote the marketing of packages of inputs and seeds. For instance USAID supports the NGO ACDI-VOCA to promote Pioneer Dupont seeds in West Africa, and cocoa transnational processors work with CARE International and other international NGOS to organise farmer training, Farmers’ Field Schools, and to build up tracking systems to establish quality and standards controls over production.

These corporate systems are gradually replacing national food governance or influencing national governance to meet the specific needs of transnational corporations. While these systems of food governance and market reorganisation are often promoted as pro-poor or inclusive, they impose specific requirements on farmers, and often marginalise farmers that do not comply with the technology and market dictates of the corporations.  For instance, medium-scale farmers have recently been idolised as a positive development of market reforms and professional farming.  Medium-scale farmers often displace smallholders and appropriate their land, but since they consume higher levels of inputs and technology, they create better marketing opportunities for agribusiness. This expansion of the commercial agricultural products of agribusiness is also undermining national agricultural research, which is increasingly becoming displaced by the market, or in its bid to be ‘competitive’, incorporated as a partner into the quest of transnational agribusiness for markets.

Ultimately this focus on agribusiness undermines alternative approaches to research that work outside high-input agriculture. Alternatives that are often driven by environmental, agroecological and smallholder concerns, or which could provide an innovative base for developing genuine adaptations to climate change based on local innovations and solutions.

Presented at public debate on “What is the Character of the Agrarian Question in Contemporary Africa?” Held at PLAAS, University of Western Cape on 14 May 2019.

Photo credit: IBM Research: ‘One of the more than 1,200 tractors on the Hello Tractor platform in Nigeria’. For original photo on Flickr, click here.