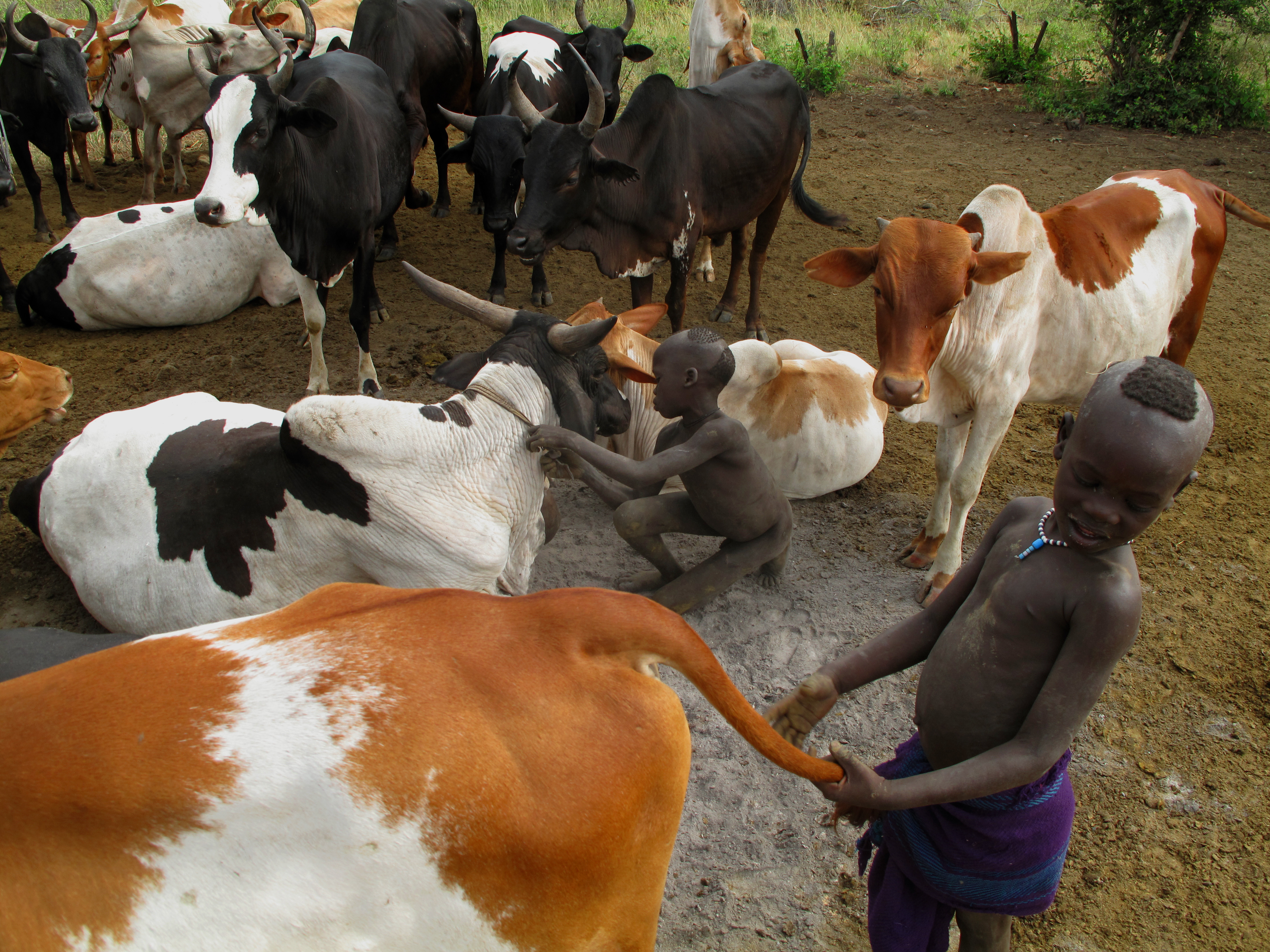 In South Omo in 2011, the Ethiopian government commenced its flagship sugar industrialisation project – one of the most controversial elements of its broader ambitions to build a developmental state. The plantations were planned to cover about 175,000 hectares of land, directly impacting the Bodi, the Mursi, and the Nyangatom of South Omo. The Bodi, a small ethnic group bordering the Omo River, are the first (and probably the most) affected by this scheme, due to land alienations, sedentarisation and ensuing violence. Since their incorporation to the Ethiopian empire in the late 19th century, the Bodi have only had weak and intermittent contact with the Ethiopian state. This changed when the government, in 2004, resettled a few hundred Konso agriculturalist settlers on their eastern highland territories, where the Bodi used to practice rain-fed agriculture. Moreover, the filling of Gibe III’s reservoir also meant that they could not practice flood-retreat agriculture as of 2015. To make matters worse, the government also conducted a sedentarisation scheme, which led to more food insecurity. On top of food insecurity, the security campaign the government conducted, meant to pacify the area for efficient infrastructure building, led to the imprisonment of many Bodi men. Careless driving and haste also led to accidents, which the Bodi took as intentional killings, further deteriorating the security situation in the areas.

This blog argues that sugar industrialisation is also indirectly coercing the Bodi to increasingly sell livestock. This is leading to a collective impoverishment of the Bodi, while they are providing an inadvertent, invisible subsidy to sugar industrialisation through the continued sale of good quality meat at relatively cheap prices.

Development of insecurity in Salamago

The Ethiopian government could not convince the Bodi to agree to the land expropriations for the sugar cane plantation, and also to the accompanying sedentarisation scheme, officially dubbed ‘voluntary villagisation’ and aimed at delivering services to congregated village centres. Thus, these ‘development’ interventions co-occurred with security measures, including campaigns organised by the Zonal office to bring men suspected of ambushes to prison, to instil fear and obedience, and break resistance. In practical terms, this meant the imprisonment of many Bodi men in Jinka, the zonal capital some 120 km away. This led to a climate of more insecurity as the Bodi reacted by attacking Hana town residents, who are exclusively non-Bodi and were primarily drawn to the area by the new business opportunities related to sugar industrialisation. The expansion of Konso settlers through spontaneous migration as well as their clearing of new lands added another layer of conflict. This culminated with more than 300 men in prison – a huge number when the Bodi’s population of just 10,000 is taken into consideration.

Owing to their limited and intermittent contact with the state, the Bodi were poorly integrated into the regional and national livestock markets. This changed when new jobs linked to sugar industrialisation brought thousands of (mainly) men to their territory. The government foresaw this as a positive – creating market linkages in remote, pastoral areas. Moreover, a market centre was also established in the district town.

The Bodi are selling more animals, at better prices now. They are, however, not taking advantage of high effective demand for their livestock, nor of the price increment. The views of the Bodi on the reason to sell tell a completely different story. The first priority for selling animals is hunger. The combination of territorial takeover by the sugar plantations/industry, insecurity and the absence of floods in Omo mean that the Bodi cannot engage in their traditional practice of retreat or rain-fed agriculture, while water is not available to use for farming in the newly established villagisation centres. As such, the Bodi have had to increasingly rely on livestock products and selling for their diet. A second reason for selling animals is cattle disease. Government veterinarians could not venture away from the district town for fear of attacks; as such the Bodi did not have access to affordable veterinary care. Moreover, the insecurity and territorial takeover discouraged mobility, leading to a high incidence of disease. Thus, the Bodi had to sell animals at the first sign of disease, both in a race to sell before the animal dies and to buy medicine for the rest of the herd.

A third reason is related to the imprisonment of Bodi men. In prison these men need some money, while the withdrawal of their labour has negative impacts on farming and other activities. Moreover, in Bodi ‘reproductive culture’ a wife has to give birth every 2.5 to 3 years. To maintain this cycle, many cattle were sold to cover expenses related to travel (with an accompanying man), accommodation and bribes to the policemen who smuggle the prisoner out of the prison facility for an ‘unofficial conjugal visit.’ Data from different focus group discussions suggests that, on average, between 1.5 and 2 cattle were sold for every year a man was in prison. This will be a huge burden considering the number of men in prison, and that most have been there for more than five years.

This distress selling is mainly triggered by state-managed opening up of the lower Omo frontier for the establishment of sugar estates. As such, what we see is the collective impoverishment of the Bodi, especially those living very close to the sugar-related activities.

Distress Selling as an Invisible Subsidy

Gunther Schlee (2010) asked whether city residents recognise that pastoralists provide the ‘cheap, quality, organic meat’ they eat. I had a similar observation in Salamago. Nobody seems to appreciate that the Bodi produce cheap, quality, organic meat. The Bodi indeed are supplying the work force in the area, the employers (i.e., the Ethiopian Sugar Corporation and other contractors), town residents and restaurant owners through these distress sales. The mixture of factors outlined above show that the Bodi economy is suffering, as they have to continue selling animals to sustain their lives and social fabric. The only recognition they get is when they don’t sell. Local officials complain they had to buy cattle and transport them more than 200 km from other pastoral communities.

The combined pressure of insecurity, food shortages and resource alienation is pushing the Bodi to sell animals faster, and at lower prices than they would otherwise need to. The limited number of buyers (mainly restaurant owners) have comparative advantage over price negotiations. As such, the Bodi are being impoverished, while they continue providing the unrecognised subsidy to sugar industrialisation, by supplying meat at relatively cheaper prices to local consumers brought to work in the sugar plantations.