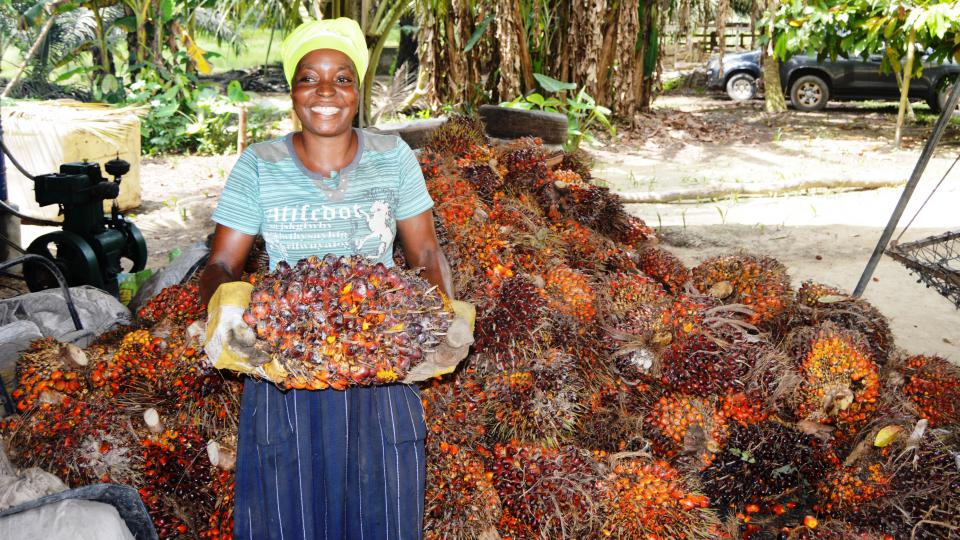 The availability of well-developed markets for agricultural output is crucial for boosting commercialisation and reducing poverty in rural sub-Saharan Africa. Oil palm, Ghana’s most important traditional export crop besides cocoa is widely produced in south-western Ghana, particularly the Ahanta West and Mpohor (Wassa East) districts. Consequently, various oil palm output marketing arrangements have emerged over the years in these areas. Although oil palm production in Ghana started in the early 1850s, it is not until 1976 that a large scale oil palm processor, Benso Oil Palm Plantation Ltd (BOPP), emerged and started large scale oil palm processing in the oil palm-rich enclave of south-western Ghana.[1] In 1988, Norpalm Ghana Ltd (NGL) entered the south-western Ghana oil palm market as one of the largest oil palm buying companies. BOPP and NGL run their own oil palm plantations, employing hundreds of contract and out-grower farmers. These companies operated as the “big two” oil palm buying companies in the area until 2013, when Building Businesses on Values, Integrity and Dignity (B-BOVID) – a medium-scale palm fruit processor – appeared on the scene, proclaiming farmer-inclusiveness in the oil palm industry, promising farmers various incentives in the aim to capture a greater share of the oil palm output market and improve farmer welfare. B-BOVID became a third force in the oil palm output market in the region. A careful observation of the operations of these oil palm marketing companies in relation to oil palm farmers elicits a key research question: does the distribution of farmers among these oil pam output buyers differ, and are there differences with respect to their level of commercialisation and welfare? We conducted a survey of about 700 households in 20 communities in the Ahanta West and Mpohor (Wassa East) districts. Apart from farmers who sell their output to the three companies (NGL, BOPP and B-BOVID) we identified ‘independent’ farmers who sell to the open market or process their own oil palm. Our study therefore involves these four oil palm commercialisation (OPC) models.

Household Socio-Economic Outcomes – How Do the Output Sales Arrangements Fare?

There is high participation in both input and output markets by farm households. For instance, 67 % of farm households used some hired labour, and 86 % of the value of crops produced were sold, on average. But does the rate of commercialisation differ across the marketing channels? Farmers who engaged with the “big two” companies (BOPP and NGL) were more commercialised on the input (fertiliser and hired labour) side, with BOPP being slightly more commercialised than NGL. Overall, independent farmers were the least commercialised on the input side of the market.

What are the associated welfare outcomes? Returns to farm labour is also highest for farmers who engaged with the “big two”, compared to B-BOVID and independent farmers. However, BOPP associated farm households were again better off than those associated with NGL (See Figure 2). Returns to labour (on- and off-farm) per worker varied widely across the sales arrangements, with BOPP and NGL associated farm households reporting the highest average returns (about US$832 and US$554, respectively); independent and B-BOVID households reported US$327 and US$296, respectively.

Policies promoting agricultural commercialisation are premised on their expected positive association with household welfare. As one would expect based on the outcomes above, per capita net income is highest for farm households who sold their output through the “big two” (US$1,586 for BOPP and US$1,081 for NGL); per capita net income is almost identical for B-BOVID and the independent arrangements – about US$952 and US$953, respectively. Based on the multidimensional poverty indicator (MPI), BOPP-associated households were the least deprived (41 %) compared with households associated with the other output sales arrangements, of which all have an identical deprivation rate. Overall, therefore, BOPP-associated farm households are better off on all the welfare measures, as well as having the highest rates of input and output commercialisation.

In conclusion, the assessment of oil palm farmers’ socio-economic outcomes in south-western Ghana reveals that among the four (4) oil palm output sales arrangements, farmers associated with BOPP have better outcomes. This prompts certain critical questions. What is it about the BOPP-model that yields these outcomes? Could it be the number of years of its existence, scale of operation, or just a coincidence? Watch this space for the next blog discussing the unique attributes and operations of the BOPP-model that could potentially contribute to these observed outcomes.

[1] Based on “Brief on the Oil Palm Sector in Ghana” by the Ministry of Food and Agriculture. Available online at http://mofa.gov.gh/site/?page_id=8819