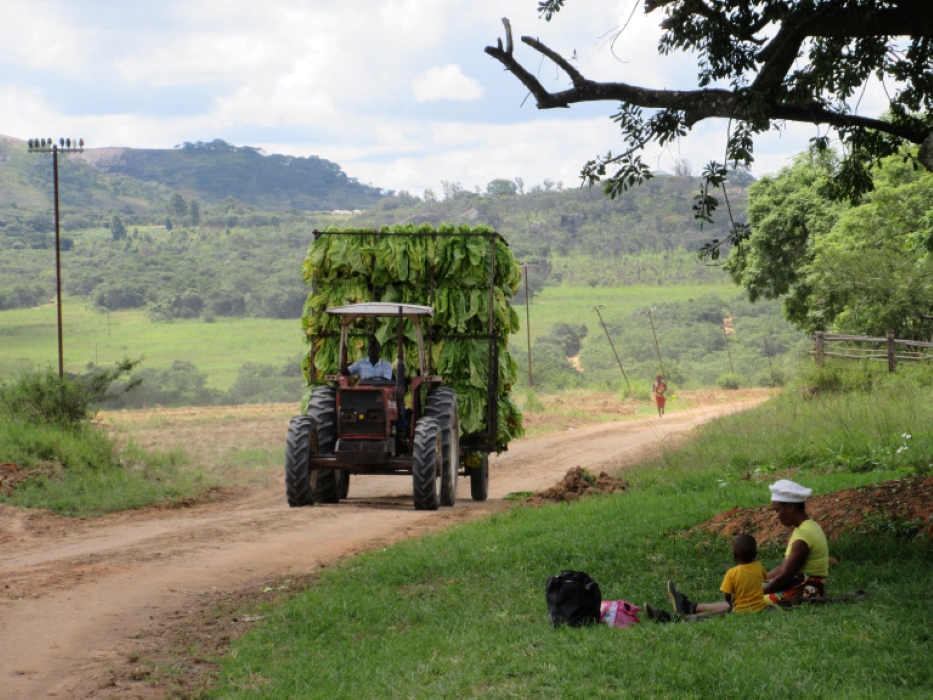 For some the answer to who are the commercial farmers in Zimbabwe is obvious. The image of the rugged, (male) white farmer in shorts, surveying his family’s land carved out through hard labour and skill from the African bush is etched on the popular imagination. But over time, there have been many different types of ‘commercial farmer’ in Zimbabwe, and a new paper from APRA – Agricultural Commercialisation in Northern Zimbabwe: Crises, Conjunctures and Contingencies, 1890–2020 – explores the conditions of their emergence in the Mvurwi area.

Mvurwi town is about 100km to the north of the capital Harare, and from the 1920s until the land reform of 2000 was surrounded by (largely) white-owned large commercial farms and estates. To the east was Chiweshe communal land (formerly reserve and Tribal Trust Land) where Africans farmed. Africans also lived in the labour compounds on the farms and in Mvurwi town, many originally from nearby countries, hired to provide labour for the large (mostly tobacco) farms.

Our paper documents the agrarian history of this area from Cecil Rhodes to Emmerson Mnangagwa, or from around 1890 and the initial colonisation of what became Rhodesia through different phases until today. The paper asks two questions: who are the commercial farmers – those producing surplus and selling it – and what drivers have affected changes in the agrarian setting, making some more or less likely to be able to commercialise production?

We made use of a diverse array of sources, including archival material, biographical interviews, survey data and satellite imagery of environmental changes (this will be the focus of a future blog). Mvurwi’s agrarian history is one of tobacco and maize, of labour shortages and migration, of infrastructure building and urban growth and of government policies that have supported some over others at different times. It’s complex and fascinating.

In the early years, at least into the 1930s, it was African farmers from Chiweshe who were the commercial farmers, supplying food to the new European settlers who were getting established on their new farms. Before the Land Apportionment Act restricted land access for blacks, Africans and Europeans lived side-by-side, but it was Africans who knew how to farm this environment and produced large surpluses of small grains, and increasingly maize.

Following the establishment of the colonial government in 1923, a huge range of measures were applied that restricted African farming and supported the establishment of European agriculture. This was the time also when tobacco became established as the major crop, providing important revenue for Britain as the colonial power. European agriculture struggled through the depression years, yet was expected to contribute to the war effort from 1939. After the Second World War, the colonial government supported the expansion of European agriculture, and invested considerably in subsidised infrastructure development, as well as the provision of finance. British war veterans were settled, and the land around Mvurwi became a prosperous farming area, on the back of state intervention and African labour, with a new set of white commercial farmers who displacing Africans.

The period from 1945 until the early 1970s, when the liberation war started in earnest, was the one where the image of the white (male) commercial farmer took hold. These were largely family farms in this period, operating increasingly efficiently with inputs of new technologies (hybrid seeds, fertiliser, tobacco curing facilities and so on, facilitated by state-led R and D), and considerable amounts of cheap African labour, often living and working in appalling conditions. The supply of labour was assisted both through recruitment from the Rhodesian Federation (from 1953), and through local migrant labour; as African farming was squeezed further men increasingly had to seek employment in towns, mines and on the farms.

After the Unilateral Declaration of Independence by Ian Smith’s government, the effect of sanctions hit the white farming community, but all sorts of sanctions-busting measures were used, with the help of apartheid South Africa and others. White commercial farming still prospered, but there was also the beginning of a trend towards consolidation, as the smaller, less capitalised and connected white family farms struggled. With the beginning of the liberation war and the arrival of guerrilla fighters in the Mvurwi area from 1973, farming was hit hard. Remote white farms became targets for liberation fighter attacks, and meanwhile the state restricted the engagement of Africans with the comrades by creating ‘protected villages’ in Chiweshe.

It was only after Independence in 1980 that farming took off again. The new state, now with support from international aid donors, shifted emphasis towards supporting small-scale communal area farming, while European farming was left largely to continue as before, but with less state support. In the African communal areas, the results were spectacular, ushering in a ‘green revolution’ with increased production and sale of maize, creating a class of African commercial farmers once again. White commercial farmers also benefited from the removal of sanctions, with preferential trade agreements in products such as beef, and they were able to shift to higher value products (horticulture, flowers etc.) as markets opened up.

The liberalisation of the economy from 1991, at the behest of the Bretton Woods institutions, saw further advantages for increasingly consolidated large-scale, white-owned commercial farms; although the withdrawal of state support, the decline of research and extension services and the loss of state-backed credit meant that poorer African farmers suffered, and the green revolution soon fizzled out. By the 1990s, a boom time for white commercial agriculture, many smaller white family farms had gone, and the commercial farmer in this period was more likely to be in a suit in a board-room, negotiating international financing and trade deals. In this period, African farming in the communal areas became increasingly impoverished, reliant on donor projects and frequent food hand-outs due to the recurrent droughts.

All changed in 2000 with the land invasions and the subsequent Fast Track Land Reform Programme. Most of the white farms in the Mvurwi farming area were taken over, although a few were left initially, along with most of the large Forrester Estate to the north. Land invaders were mostly from land-scarce and poor Chiweshe as well as other communal areas and towns nearby. The land invasions resulted in the creation of smallholder A1 resettlement areas, often on farms with considerable numbers of compound labourers living there. Later, medium-scale A2 farms were established, attracting very often middle class professionals along with political, business and military elites.

Today it is a very different farming landscape, with new commercial farmers. These are largely black (although there are some joint ventures with former white commercial farmers and Chinese companies in the A2 areas) and include both successful A1 farmers (men and women) who have managed to accumulate and invest in their farms through own-production and some A2 farmers who have managed to secure finance through off-farm jobs or through state patronage. Unlike their white counterparts who established farms in the early twentieth century with a huge amount of state support, today’s resettlement farmers suffer a lack of assistance and limited finance. State incapacity, systemic corruption and international sanctions combine to undermine the potentials of commercialisation, as this blog has discussed many times before.

So what do we draw from this history (check out the long paper for the detail)? First is that there are very different types of commercial farmers beyond the stereotypical image that have existed over time. This is because different people have had different opportunities in each of the historical periods we have identified. This has been affected by state policy, international relations/sanctions, labour regimes, markets and so on. We see over time not a simple, linear secular trend, driven by relative factor prices, land scarcity, population growth or environmental change, but sudden shifts, as agrarian relations reconfigure.

Such changes may emerge through state policy – Land Apportionment, Maize Control and so on obviously had a huge impact in the 1930s; through the investment in particular infrastructure – the road from Concession to Mvurwi opened up markets massively and facilitated urban growth, as did the arrival of mobile phones decades later; as a result of the emergence of new technologies – the SR52 hybrid maize revolutionised white commercial farming, as did the arrival of the rocket barn for curing tobacco; as a result of a significant environmental event – the droughts of 1947, 1984, 1991 – and many more – meant that some farms went under, others were taken over or African labour migration became necessary; because of changing patterns of labour availability – the challenges of labour recruitment were a continuous refrain among European farmers from the 1930s, as they are among commercial land reform farmers today; as a result of shifts in geopolitics and global markets – sanctions from 1965 and 2000 have had huge impacts, as did the requirements of the Washington consensus loan conditionalities from the 1990s, while the growth in tobacco demand from the 1940s and again from the 1990s into the 2000s (increasingly from China) drove farming economies across Mvurwi. Along with other reasons discussed in the paper.

Like Sara Berry and Tania Li (among others), the paper argues that it is events – crises, conjunctures and contingencies – as inflected by social relations (of race, class, gender and age) and politics that offer a more insightful explanation of the history of farming in Mvurwi. This history is non-linear, uncertain and involves a complex interaction of drivers, and far from the deterministic theories either of classic agrarian Marxism or evolutionary agricultural/institutional economics. For this reason, over 130 years, there have been many different types of Zimbabwean commercial farmer, and there will likely to be others into the future as chance, contingent events and particular crises combine with longer-term drivers of change.

20 years after Zimbabwe’s land reform: what does the future hold?

COVID-19: responses of rice farmers and processors in the Fogera Plain, Ethiopia

COVID-19 lockdown in Zimbabwe: ‘we are good at surviving, but things are really tough’

Leveraging on innovation and technology for inclusive growth in Kenya

Is all work harmful for children?