The challenge of getting to Lukilikila village 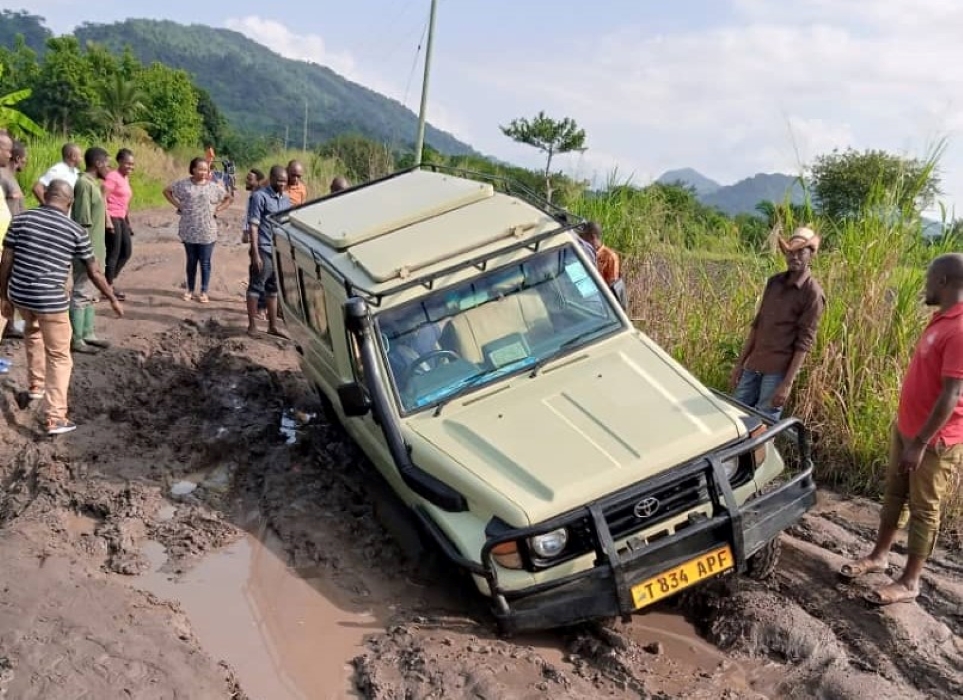 Rice production and marketing in Luvilikila village have benefited from its close proximity to KPL since 2010, especially from improvements of feeder roads connecting the village to the main road from Ifakara to Mlimba. The government initiatives under the Southern Agricultural Growth Corridor of Tanzania (SAGCOT) framework is designed to link large agricultural investors with surrounding smallholder farmers and other value chain stakeholders through various institutional arrangements. It was expected that smallholder farmers would benefit through technology transfer, improvement in the infrastructure and market linkages.

Luvilikia village is located 13 km from the main road and from KPL head office.  The feeder access road from the main road to the village partially passes the KPL farm – when the farm was still operational, the access road was well maintained by the company.  When the company ceased farm operations in 2018, maintenance of the feeder road leading to Luvilikila village also stopped, creating a serious challenge of accessing to Luvilikila during the rainy season.

Luvilikila village is known to be one of the leading rice production areas in Mngeta division.  It has a large concentration of medium scale farmers who cultivate up to 25 hectares of paddy.  The poor road condition has affected the performance of all farmers in this village in two aspects.

For instance, during the last harvest season, most farmers in neighbouring villages including Mchombe, Mngeta, Nakaguru and Itongowa, sold their paddy on a kilogram basis due to big influx of traders they, fetching up to TZS 140,000 (GBP 50) per 100 kg bag of paddy.  This has overcome the problem of unfair pricing by traders who used to buy paddy based on volume instead weight. Most of this measuring equipment, such as tin and sacks, were overfilled or tampered with, leading to farmers being cheated and getting low prices.  In comparison, most farmers from Luvilikila village could only sell at TZS 100,000 (GBP 35) per 100 kg bag.

Farmers in Luvilikila village also face floods, mainly caused by poor maintenance of the drainage systems which separates the farming plots and blocks. These drainage systems, which also maintain water flows between plots, were previously maintained by the KPL. The floods have further affected the roads and made farming by tractors impossible.   Therefore, most farmers rely on animal traction, the rental price has increased by 100% from TZS 50,000 (GBP 18) last year to TZS 100,000 (GBP 30) this season, and the price can be higher on muddy fields. Slow responses or lack of support to farmers in Luvilikila village increase the production costs for farmers and lower their profit hence undermining the rice commercialisation efforts.

Hence, farmers in Luvilikila continue to pray and hope, sooner rather than later, that KPL or another investor will resume operations so that famers and traders will benefit from spill-over effects of their operations in the area. The discussion with the Luvilikila village chairman revealed that due to closure of KPL, some people, especially the youth and women, have lost the opportunities for casual employment which used to be a key source of income. The chairman insisted that loss of such livelihood opportunities from KPL employment to youth in the area have resulted in some youth being engaged crime, such as theft.

In addition, the farmers in Luvilikila village are quite optimistic that the government will deliver on the promise of connection to the national electricity grid under the rural electrification programme, where every village in mainland Tanzania should be connected by 2021.  When power comes, they say, the government will surely collaborate with KPL and other development agencies to also improve their feeder road.  They know that improving their livelihoods largely depends on their increased participation in rice commercialisation.  While the farmers have a role to improve productivity and production, reaching their full potential depends on facilitation by the government and other development agencies to improve rural infrastructure, including the feeder road to Luvilikila and electricity.   These will enable more farmers to add value and sell rice instead of paddy, hence fetch higher prices. This effect has been evident from other villages where feeder roads and electricity infrastructure have been improved, where those in the private sector, including traders, have built the storage and processing facilities to help farmers store their paddy in order to sell it when prices are higher, or to process and then sell the rice.

Cover photo: Vehicle stuck on the road to Luvilikila, February 2020.

Credit for all photos: John Jeckoniah