Positioning Tanzania in the regional market for rice: Lessons from the East Africa Rice Conference 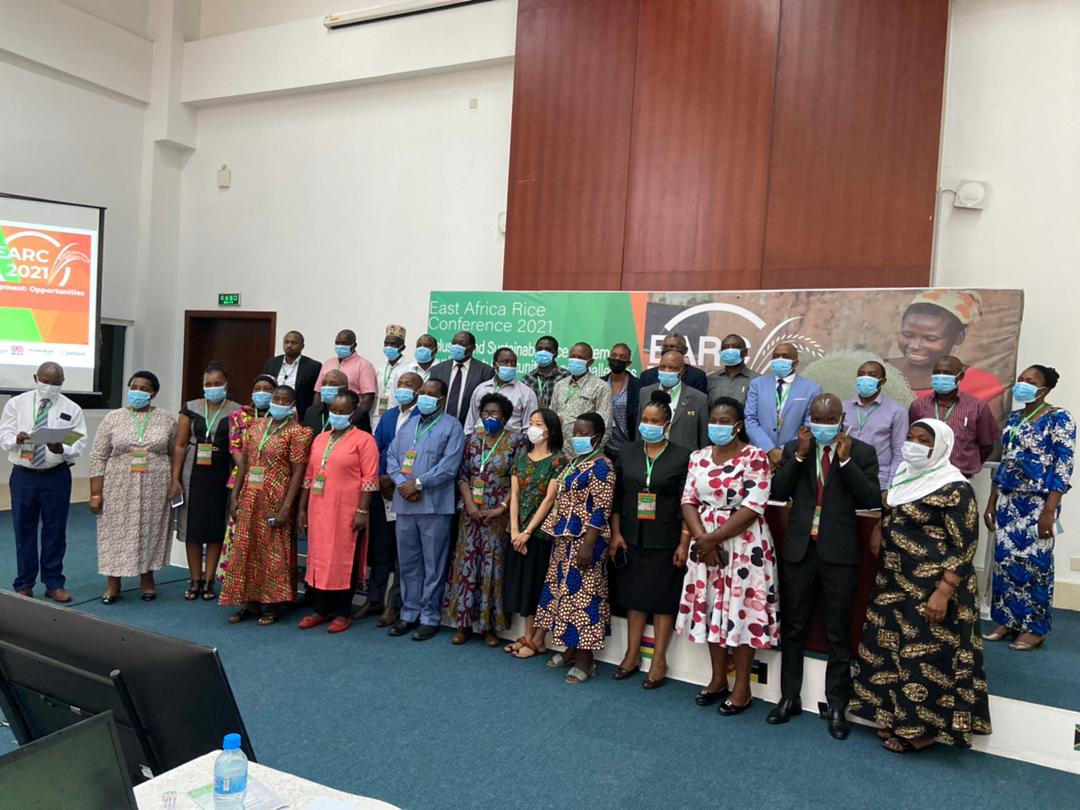 As part of the 2021 East African Rice Conference (EARC), national workshops were held in six African countries: Burundi, Ethiopia, Kenya, Rwanda, Tanzania and Uganda. EARC aimed to identify policy reforms to transform Africa’s rice sector through scientific innovations, and the national events provided an opportunity to assess such opportunities in each of the six countries, individually. In this blog, the fifth in our series on these national workshops, we reflect on the Tanzanian event.

Tanzania’s national EARC workshop, held at the Julius Nyerere International Conference Centre (JNICC) in Dar-es-Salaam from 18th – 20th May 2021, has been regarded as a great success by many of the participants. The feedback given by one attendee reflects the views of many, as she enthuses, “It was a great conference and very informative to me.” The meeting was attended by a diverse group of participants including representatives from the Ministry of Agriculture, in particular, those involved in coordinating the implementation of the second phase of the National Rice Development Strategy (NRDS II). Others included researchers, extension agents, farmers, traders, processors, facilitating non-governmental organisations, representatives from financial institutions and media.

In his opening remarks, Professor Siza Tumbo, the Deputy Permanent Secretary for the Ministry of Agriculture, was represented by Engineer Geofrey Maregesi from the Ministry of Agriculture. In his speech, the Deputy Permanent Secretary highlighted opportunities and challenges facing the rice sub-sector in Tanzania. He then pointed out the focus of NRDS II as; “To sustain national self-sufficiency in rice production while contributing to the regional self-sufficiency such that Tanzania becomes a market leader in the region.” He further discussed the national strategic objectives and the priority areas of intervention, which include; improving the rice value chain’s climate resilience, strengthening extension services, improving and enhancing regional market competitiveness in terms of policy and quality, and promoting appropriate seed varieties. The presentations and the panel discussions, which followed enabled the participants to discuss pertinent issues that limit the potential of the rice sector in Tanzania. Their deliberations led to recommendations to direct transformation of the rice sector and improve Tanzania’s ability to respond to market demands in the local and regional market. The key lessons and recommendations emanating from the discussions are outlined under the conference’s key themes as summarised below.

Participants urged the government to expedite implementation of the governmental plan under the Tanzania Official Seed Certification Institution, to increase staff for quality declared seed (QDS) down to the district level in order to address the huge supply gap for improved paddy seed. It was also recommended that cooperatives and farmers’ groups be strengthened to foster collective action. Through such groups and cooperatives, participants predicted that it will be much easier to enhance productivity improvement and hence accelerate rice commercialisation, which had been demonstrated to have a significant livelihood improving effect.

The participantsurged the Ministry of Agriculture to expedite plans already underway to conduct baseline data collection of post-harvest loss for various crops including rice, so that appropriate steps are taken to minimise such losses. It was also recommended that there should be tax incentives to facilitate the importation of suitable and competitive rice mills as a strategy to improve the competitiveness of rice from Tanzania rice in regional markets. This recommendation came to address the challenge currently facing many rice traders on how to address the problem of dust after polishing the rice. The actors were also urged to refrain from engaging in practices that compromise the quality of milled rice. Value chain leaders (traders, processor, exporters and government regulators) were urged to ensure that such practices are stopped before they become institutionalised as normal.

The stakeholders recommended a seed improvement programme and the promotion of sustainable rice intensification (SRI) technologies to enhance sustainable rice-based livelihoods while ensuring gender and youth integration. There was a consensus among participants that seed improvement was fundamental to attain higher productivity. It was, however, urged that seed breeding programmes should be strengthened such that in the near future, seed should be produced. There was a strong feeling that even though the local market has a higher preference for aromatic rice, the SARO5 variety, which is semi-aromatic, should be promoted for trade in local and export markets. However, caution was sounded to ensure that alternative varieties are always at hand to minimise risks, in case SARO5 becomes infected by diseases or faces other problems. Paddy breeding programmes and the seed sub-sectors were also asked to produce area specific varieties in response to producers’ preferences, which reflects consumer demand. This includes strengthening the current government initiatives to work with stakeholders in promoting the use of QDS. It was also recommended that breeders should collect, clean and preserve genetic characteristics of traditional varieties for future breeding programmes.

Since SRI technologies are best practiced under irrigation, supporting inclusive livelihoods therefore also entails increasing the area under irrigation up to the target set under NRDS II (to have 2.2 million hectares by 2030). Such ambitions will also require reliable and affordable financing. Under inclusive finance and investment therefore, it was reported that there is a guarantee scheme under the Tanzania Agricultural Development Bank, whose experience and success is expected to influence other financial institutions to increase lending to smallholders.

In this regard, conference participants recommended the promotion of the use of QDS for rice, adapted and suitable for different areas, scaling up SRI and expanding the area under irrigation beyond 2.2 million hectares by 2030 as per NRDS II. The Rice Council of Tanzania, which was represented at the EARC took the issue of promoting QDS to heart, making it the main agenda in their second annual workshop, conducted on 6th – 7th June 2021.

Learn more about the other national EARC events, below: