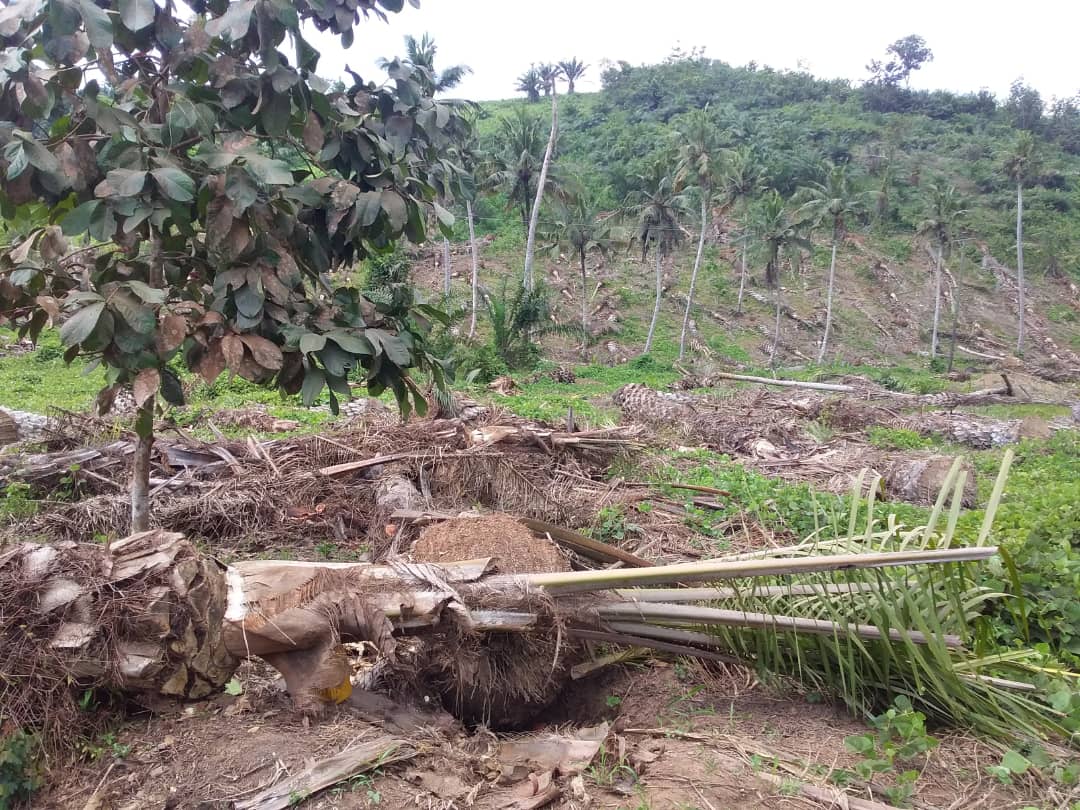 Cash crop production is widely considered vital for improved incomes in developing countries. In Ghana, the production of cash crops in the past few decades have assumed a greater proportion of farmers’ production in the south-western parts of the country, an area predominantly known for large cocoa, oil palm, coconut, and rubber plantations. These crops (specifically, cocoa, oil palm and rubber) attract demand on the international market, hence are associated with high export values.

We observed a striking phenomenon during the Round 2 data collection of the APRA Work Stream 1 study, which sets out to understand the channels of oil palm commercialisation in south-western Ghana. We saw farmers clearing the oil palm plantations for rubber cultivation. However, why would farmers substitute rubber for oil palm despite the potential for oil palm reduce poverty among farmers? Why are farmers stepping out of oil palm production? Indeed, the APRA Work Stream 1 data reveals that approximately 12% of 726 households in the baseline sample stepped out from oil palm production between 2017 and 2019.

Some farmers explained that incentives[1] provided by rubber-buying companies, such as Ghana Rubber Estates Limited (GREL), is the reason for their shift away from oil palm to rubber. Some farmers also feel cheated by the oil palm companies (OPCs) and their agents through adjustment of weighing scales to cheat farmers and low prices. Additionally, due to poor roads linking most oil palm producing communities, OPCs were sometimes unable to reach certain communities, resulting in oil palm bunches spoiling. This is particularly the case for farmers in New Akwidaa, one of APRA’s WS1 study communities.

The performance of the competing cash crops in the international and local markets, in terms of supply, demand and price of output, will play a key role in the dynamics of the observed substitution of crops and, subsequently, determine their future. This will not be limited to the output of the crops, but the factors of production such as land and labour. Field accounts from oil palm farmers, for example, suggest labour constraints are further diminishing the production attractiveness among local farmers, especially the older generation made harder by the absence of hired labour. This serves as a disincentive to farmers without production and marketing incentives, including those already into oil palm production to sustain production, and thus substituting oil palm with other less labour-intensive cash crops such as rubber and cocoa.

The decision to convert or clear oil palm fields for other crops, or for alternative uses, is hastened by better incentives for producing different crops, labour constraints for oil palm production and the use of oil palm trees for the production of palm wine and akpeteshie (a locally produced alcoholic drink) after felling them. Whilst these issues point to a gloomy future for oil palm production, local palm oil producers in the communities who aspire to scale up production for bigger markets may raise demand for oil palm if they can sustain production and join the OPCs midstream in the value chain of the crop. Incentives offered by the market will determine the future of oil palm in the region, which will be relative to the performance of its competitors’ actors in the region and beyond. Competitive incentives from OPCs and other oil palm processing and marketing firms can reduce or eliminate the substitution of oil palm.

On the surface, at least, oil palm may be generating greater value-chain benefits to the local economy. This is partly because rubber is exported entirely raw, while oil palm is processed locally or exported as a semi-finished product, thereby ensuring enhanced local participation in the value chain and generating higher incomes to support livelihoods in the local economy.

Shift away from oil palm: effect on local food security

Rubber production, like cocoa, has potential food insecurity concerns. First, rubber production does not permit intercropping with food crops, as is the case of oil palm. If smallholder farmers are giving up their land for rubber production in place of crops, the little food that makes it to the market will be more expensive to buy. This could pose a threat to the household’s food security in the short term. In the long term, however, some farmers may choose to revert to food crop production in response to a high demand, provided that land it still available.

Some oil palm farms are being purchased by miners as concessions[2]. This observation is particularly predominant in Awunakrom, one of APRA Ghana study communities. Farmers explained that, when traditional rulers designate land as a mining concession, they lose the right to cultivate that land, posing a threat to the survival of the oil palm industry in the area.

[1] Rubber-buying companies in south-western Ghana provide inputs such as high quality seedlings, fertilisers, chemicals and tapping tools, guaranteed market, credit, and training on input use as well as new production techniques to improve production levels. Additionally, GREL for instance provides social infrastructure, such as school and clinics to the local communities in their areas of operation. For a detailed discussion on incentive schemes provided by rubber-buying companies in south-western Ghana, click here

[2] In Ghana, formal mining concessions are distributed by the Minerals Commission operating under the Ministry of Lands and Natural Resources (MoLNR), but this coexists with informal concessions that are granted to small-scale miners by local authorities. For a detailed discussion, click here.