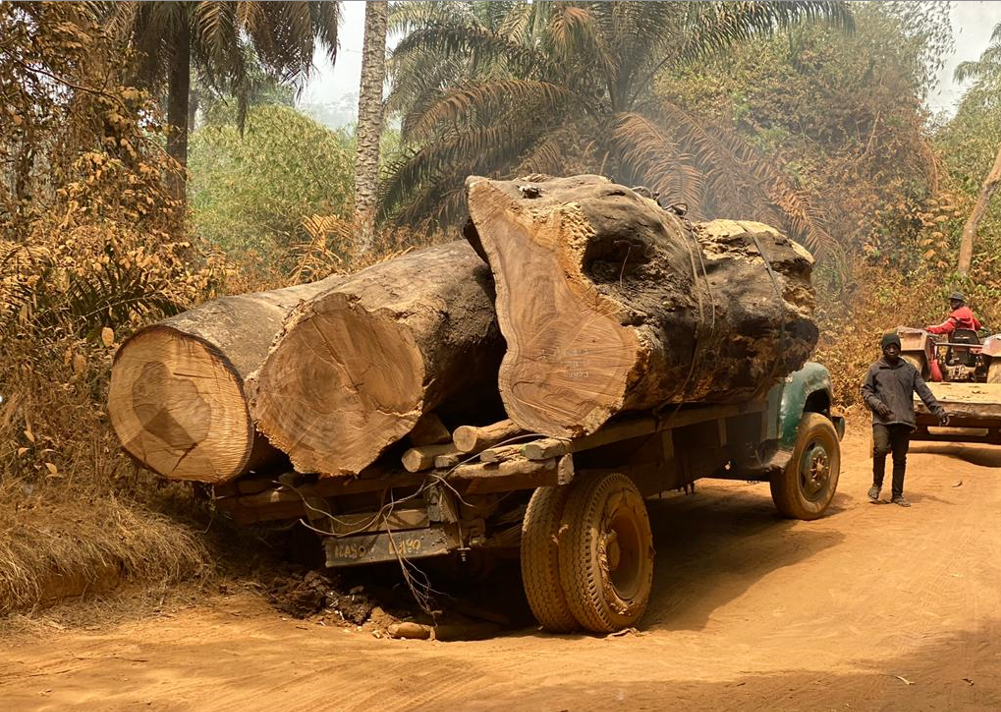 Cocoa farmers in Idanre, Ondo State, Nigeria are suffering from the activities of loggers which leads to damaged farms and has a detrimental impact on the livelihoods of farmers. In our latest blog, APRA researcher Bimbo Omopo describes what he saw during his study in the cocoa farming communities and outlines what action is needed to stop indiscriminate tree-felling.

I had high hopes when I embarked on the bus to Ondo state, Nigeria, for the APRA work stream 2 study: First, the purpose of my study was to discover the dynamics and emerging trends in cocoa production in my country. Second, I would travel to a historic town and largest producing spot of Cocoa in Nigeria. However, I was not prepared for the degradation, desecration, and destruction of the forest habitat caused by logging.

Idanre town is divided into three localities of Odode-Idanre, Atosin and Alade.  These all produce cocoa, though Odode-Idanre is the highest producer due to a greater population and the large farming areas. The farming areas in the centre of town have already been utilised by farmers to cultivate cocoa, leading to a demand in larger spaces to plant new cocoa farms. This, in turn, have meant that farmers have settled in government reserve areas to continue farming.

The interior farming communities of Odode-Idanre, where government farm reserves for newly planted cocoa farms thrive, is mainly accessible by motorcycle, as the roads are in a deplorable state. Even so, large trucks and bulldozers hauling bagged cocoa beans to the town travelled on the road, as well as motorcyclists, driving dangerously and carrying bananas and plantains to market. Tractors and bulldozers also drove heavily on the roads, heading to the interior villages where the cocoa reserves are located, to lift already felled trees.

However, as I travelled to the cocoa reserves, I could also hear the cutting and slashing of saws, and see the rows of trees felled by loggers, waiting to be transported  to be cut and processed in the sawmills. There were more than 20 sawmills on this road that were served by numerous trucks, ready to take the processed timber to nearby Idanre town. These sawmills demonstrate a thriving log trade, but also the destruction of forest habitats in Odode-Idanre.

There was similar destruction of forests in the reserve areas – cocoa farmers complained of incessant logging, and in the worse cases, loggers ventured onto their farms to remove mature trees. According to the farmers, these loggers were certified by the government and granted access to cut trees in the reserves. However, they are not sure if the government also allow loggers gain access to farmlands where cocoa trees are planted.

“These people [loggers] enter our farms in the middle of the night, after we are done for the day, and cut down mature trees on our farms. Some of these trees were used as shades for the cocoa planted. This is a great problem we encounter.”

Such logging activities have a range of negative effects on cocoa farmers and the environment:

In addition, a reduced forest inadvertently exposes the area to high temperatures and extreme weather conditions. Many of these negative effects were observed on the Cocoa farms at Odode-Idanre.

There are several solutions to resolve the impact of logging activities in Odode-Idanre, but strict forest management is the most important. Forest management authorities of the state government need to be stricter with constitutional provisions that would aid environmental protection. One of such strict enforcements that could be useful is section 20 of the Constitution of The Federal Republic of Nigeria, which makes it an objective of the state to improve and protect the air, land, water, forest and wildlife of Nigeria.

Also, the state government should enact laws to ensure that only certified loggers enter the forests to fell trees, with more stringent rules concerning the replacement of trees cut. Any license granted to loggers who flout limits granted by the government should be revoked, which would in turn encourage adherence to the rules. There should also be severe repercussions for loggers who trespass into farmers’ lands to cut down shade trees. This would help to save cocoa trees, protect the livelihood of farmers, and facilitate environmental sustainability.

Strict regulations on the activities of loggers in Odode-Idanre would both protect the cocoa trees and the economic livelihoods of farmers, and reduce forest and environmental degradation. This would lead to more sustainable communities – a target that the Sustainable Development Goal 11 seeks to achieve.