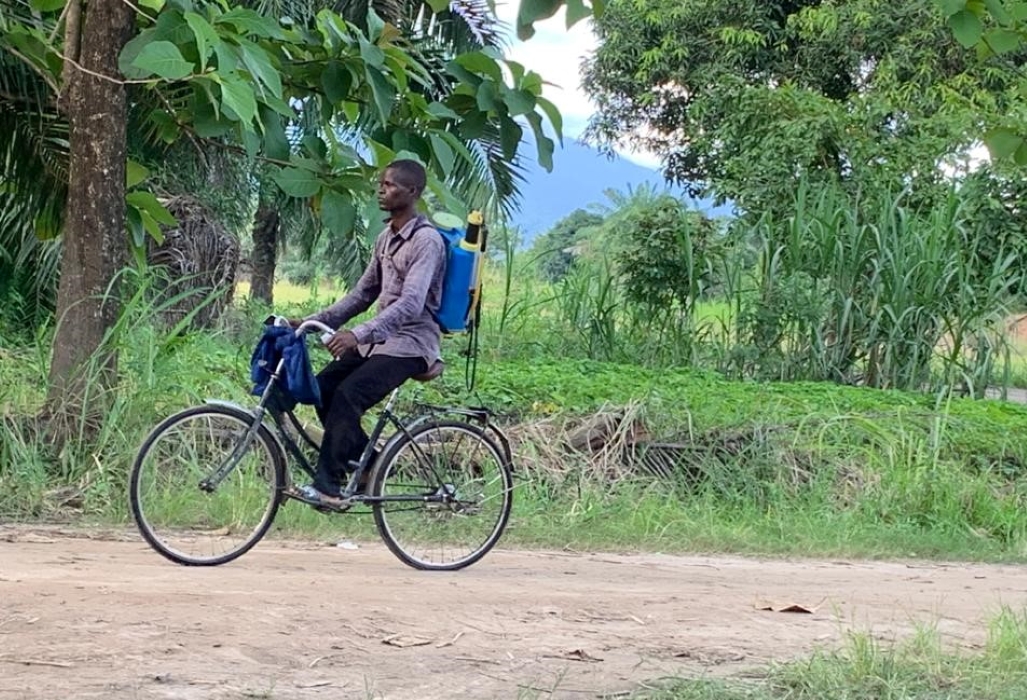 Herbicide application for rice production has risen to a new level, not only in Mngeta division but in the entire Kilombero valley, and is favoured by farmers as it replaces some manual and backbreaking farm implements, such as the hand hoe.  In 2017 when the first wave of data collection under work stream one (WS1) in Tanzania, about 58% of the farmers in the sample had applied herbicides, being the highest among all purchased inputs.  Discussions with farmers and extension agents during the second wave of data for WS1 in February this year indicate that virtually every farmer uses herbicides to control weeds in rice farms.

It was a common scene in most villages to find men and women carrying a knap sack sprayer on their back, on foot, by bicycle or motorcycle – either going to or returning from farms from their own farms or they provided services to other farmers.  Everybody agrees that herbicide application has greatly reduced the drudgery of land clearing and weeding using hand tools.

According to extension agents for Chita village in Mngeta division, a full dose of herbicide application begins with paraquat, a wide-spectrum herbicide that kills all types of weeds.  Usually, the field is ploughed using oxen, tractor or power tiller seven days after application.  This is followed by harrowing by hand, oxen or power tiller.  A farmer may wait for a few days before applying a pre-emergence herbicide, followed by transplanting seedlings in the prepared field.  Farmers who broadcast rice seed would do so before harrowing, followed by application of the pre-emergence herbicide.  The third stage of herbicide application is done two to four weeks after transplanting, when emerging weeds are still young.  Two herbicides are combined to suppress broad-leaved weeds and a selective herbicide for grass type weeds without affecting rice.  The total cost of a full herbicide application from land clearing is about TZS 80,000–100,000 (27-34 GBP) per acre during the 2019/2020 farming season.

There is general consensus that herbicide application has made rice production easier, maybe even cheaper.  Land clearing and weeding were very laborious and expensive if one used hired labour.  According to one farmer, before the labourers finished weeding a farm plot, new weeds had emerged, so one had to weed two or three times, even then, some weeds persisted.  The high demand for herbicides and herbicide application services has opened new opportunities.  Input suppliers contend that herbicides are the fastest moving between October and March. The demand for agro-chemicals during the dry season is lower.  Two types of services have emerged.

So, the business for herbicides and sprayers is booming and life has become easier for rice farmers.  The best proxy to gauge this trend is the number of registered input suppliers, which has increased by 128% within six years from 32 in 2014/15 to 73 in 2019/20 in Kilombero district (Figure 4). The number of operating input suppliers is probably higher since it is estimated that for every registered supplier there are about two or more who have not registered, sometimes operating between September and March when demand for farm inputs is highest.

What happened to women and young men who used to dominate as laborers during weeding?  Even the women agree that they did that out of desperation but the task was too backbreaking, taking up their entire day.  Even with herbicides, some hand weeding is still required.  It is estimated that herbicides have replaced hand weeding by about 70 – 80 percent.  Employment opportunities exist, but the task is less laborious.  When the young men providing spraying services and others return from farm operations, they are tired and hungry and they need a place to eat.  So, food vending, particularly among women, is a growing business.

In many cases, the farmers and providers of spraying services do not adhere to safety requirements for chemical application.  Some farmers did not have any protective gear (boots, coat and mask), most of them saying it is too expensive.  Some, however, do not use protective gear out of ignorance.  They dismiss instructions from agricultural extension agents and input suppliers, arguing that they live in a harsh environment anyway, their bodies are tough – they can endure any negative effects from the chemicals they handle.  Yet others say, “I will be careful or I will wash after applying.”

It is also likely that many people who apply the herbicides cannot read and follow the manufacturer’s information on the recommended dosage, although majority of them seem to have knowledge on the best estimate of the herbicides per acre.   The damage due to careless handling of agricultural chemicals is already being felt.  According to the agricultural extension officer for Mchombe Ward, Mr. Lukas, incidences of skin rashes due to agricultural chemical application are becoming more common.

Another negative consequence of continuing application of herbicides and other agro-chemicals is the effect of chemical levels in streams and rivers within Kilombero valley and for downstream users of Rufiji river basin.  Discussion with agricultural extension officers within Mlimba Local Government Authority under Kilombero District, the volume of agrochemicals (herbicides and insecticides) distributed for sale within Kilombero district has been increasing.

Meanwhile, there is no evidence of any institution monitoring the quality of water within Kilombero valley and downstream. This information is yet to be verified with the National Environmental Management Council (NEMC).  Even with the current increased use of agrochemicals in the valley, the application levels are still low compared to global rates.  However, it is important to monitor the levels of use and how they are reflected in water bodies that are used by humans and livestock in the Kilombero ecosystem, within which the Kilombero Ramsar site is located to maintain biodiversity.