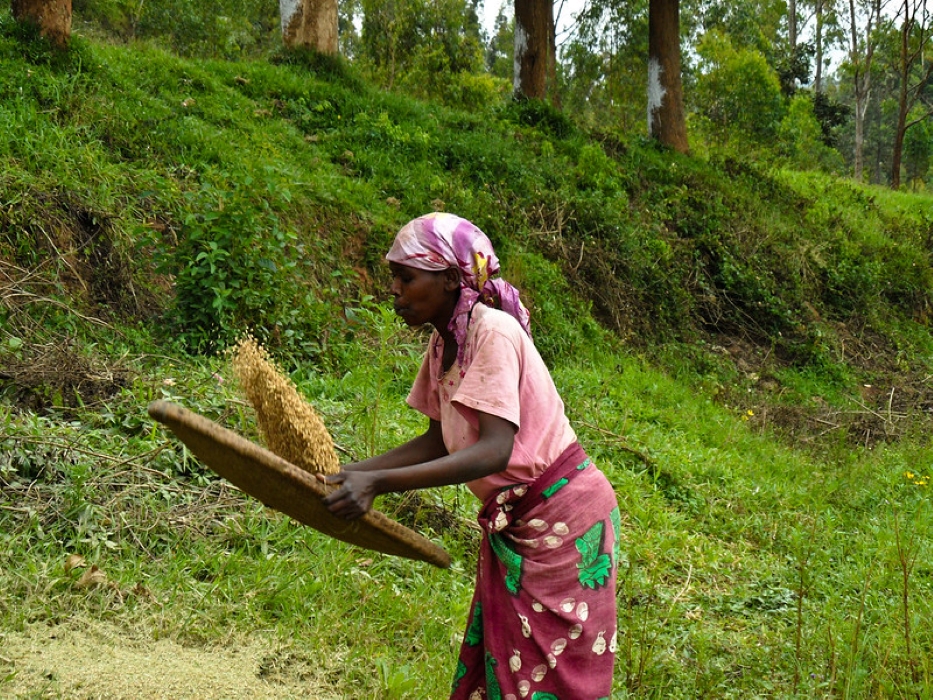 In this blog, originally published for the CGIAR Gender Platform, gender experts present evidence and policy lessons on gender and youth integration in rice-based agri-food systems from Africa.

For centuries, rice has played a central role in Asia’s rice-based economies, so central that the crop has become a symbol for wealth, power, and food security. “White gold,” it has often been called.

This label is slowly taking on its own meaning in Africa, where rice is increasingly being seen as a strategic crop, a pathway out of poverty, and for women, a significant opportunity.

The extent of women’s participation and the roles they play in agri-food systems may vary across countries and regions, but the reality remains the same: women are central to the sustainable development of agri-food systems. However, social, political and market institutions which govern food systems portray elements of gender bias at all levels, holding back women in vicious cycles of time and income poverty.

There is still much to unpack, according to Puskur. Driving gender-transformative change requires adequate and credible evidence, of which we have little for Africa’s rice sector.

While women have the potential to become powerful agents of change, driving food systems transformation in Africa, Puskur suggests a shift in perspective to ask, “How can agri-food systems support gender equality?”

One of the major constraints African women face is lack of access to land. There is compelling evidence that women’s control over land has immense positive impacts on intra-household income. Efforts are being made in many countries to address women’s access to land, but challenges abound.

In Rwanda, a pilot land rights regularization program helped women get access to land control, leading to doubled impacts on investment and maintenance of soil conservation measures. In the case of women-headed households, the impacts tripled. However, land use restrictions gave them little freedom to grow crops of their choice, negatively impacting their food security.

Puskur shared how, in Mali, a series of community-based dialogues provided a space to clarify women’s and men’s land rights, eventually leading to village-level ‘local conventions’ and formal permanent titles for land held by women’s groups. The dialogues helped participants work through customary and religious systems and analyze existing power and gender structures, observing how these evolve with time and how they affect access to land, decision-making, and sources of conflict.

What little evidence is available shows that women’s active participation is needed not only in the implementation of tools, policies, and initiatives, but perhaps, more importantly, in the design and conceptualization of these.

The labor-intensive nature of rice farming also offers a particular challenge, given women’s chronic time poverty and their limited access to mechanization technologies, limiting cultural beliefs about who should use machines and the constraints women face in hiring labor. For example, in Rwanda 84 percent of women in 31 cooperatives were hired mostly for scaring birds off fields, a high-risk, low-reward activity that required little to no skills.

Estimates from India show that women spend around 200 to 300 hours per acre of land per season in transplanting and transporting, and another 100 hours in weeding. All this is done standing or bending in chemical- and leech-filled water, posing health risks not just to the women themselves, but to their children as well.

The Agricultural Technical Vocational Education and Training for Women (ATVET4W) implemented by the African Union Development Agency (AUDA-NEPAD) in six African countries not only focused on skills training for women, but also supported them to benefit from these skills.

Women who engage in mechanized farming, such as the use of reapers, save time for other activities and possibly, other streams of income. “Women in the Driving Seat” is one such project under ATVET4W that aimed to open access for women to mechanized agriculture.

“ATVET4W was designed based on very extensive knowledge of gender transformative approaches. So, it was also about influencing the attitudes, practices and behaviors of men and women who were engaged in these aspects,” Puskur said.

In Africa and many parts of the world, smallholder farmers are usually ‘price takers’—they take the price they can get—and women farmers have even lower bargaining power.

Oxfam Novib’s Gender Action Learning System (GALS) is an example of breaking gender-based barriers at various levels, from personal to household to groups and communities. Individual and household behavior change influenced livelihood improvement (higher productivity) and better access to services and markets, among others.

Social capital such as collectives or cooperatives may be a way of overcoming hurdles to input and output markets, but Puskur emphasized that it is important to design these initiatives thoughtfully, so that women enjoy the full benefits.

“We also need livelihoods, diversification, creating decent employment and entrepreneurship opportunities, skill development, and asset building. Social protection measures have to go together with these so that we can cushion the vulnerable women from income and enterprise losses,” Puskur explained.

Steven Cole, Senior Scientist (Gender Specialist) at the International Institute of Tropical Agriculture (IITA) encapsulates this part of the conversation with “Women shape and are shaped by rice agri-food systems. [They] are often disproportionately impacted by discriminatory institutions that govern, in many ways, the agri-food systems and make the formal and informal rules.”

Within the household, Cole emphasized the need to have a conversation between couples about their vision.

“If the household broadly wishes to increase productivity through adopting a new rice variety, what does that entail? What are the blockages and what prevents that from happening? You have the technology, but then there are some constraints that prohibit that technology adoption,” Cole explained.

Thelma Akongo, Head of Gender and Social Safeguards, National Agricultural Research Organisation Uganda, recalled that in the past, initiatives also failed to consider the diversity of women under the lowland rice production system. Large-scale producers, including women with access to income and resources, are a radically different from women subsistence farmers, who are often burdened with scarcity and conflict in the household.

Across the rice value chain, policy goals are usually prioritized according to political factors. Social factors receive little attention, resulting in policies and strategies that are not inclusive.

“If you look at Africa, a lot of the policies are focused on trade tariffs and transportation in taxes, given the import dependence. Most of these are impacting rice traders who are mostly men.  Women who have limited mobility and sell at farm gate might not really benefit from this,” Puskur mentioned.

To achieve sustainability in rice agri-food systems, we should move toward a scenario where women are on equal footing with men across the entire rice value chain, including having control over income and production, important resources such as land and water, and over decisions on important activities such as mechanization, post-harvest, and marketing. Achieving a sustainable transformation of rice food systems in Africa will remain a mirage if gender equality is not addressed in tandem.