Evidence uptake and use to transform Africa: Lessons from the “Utafiti Sera” model 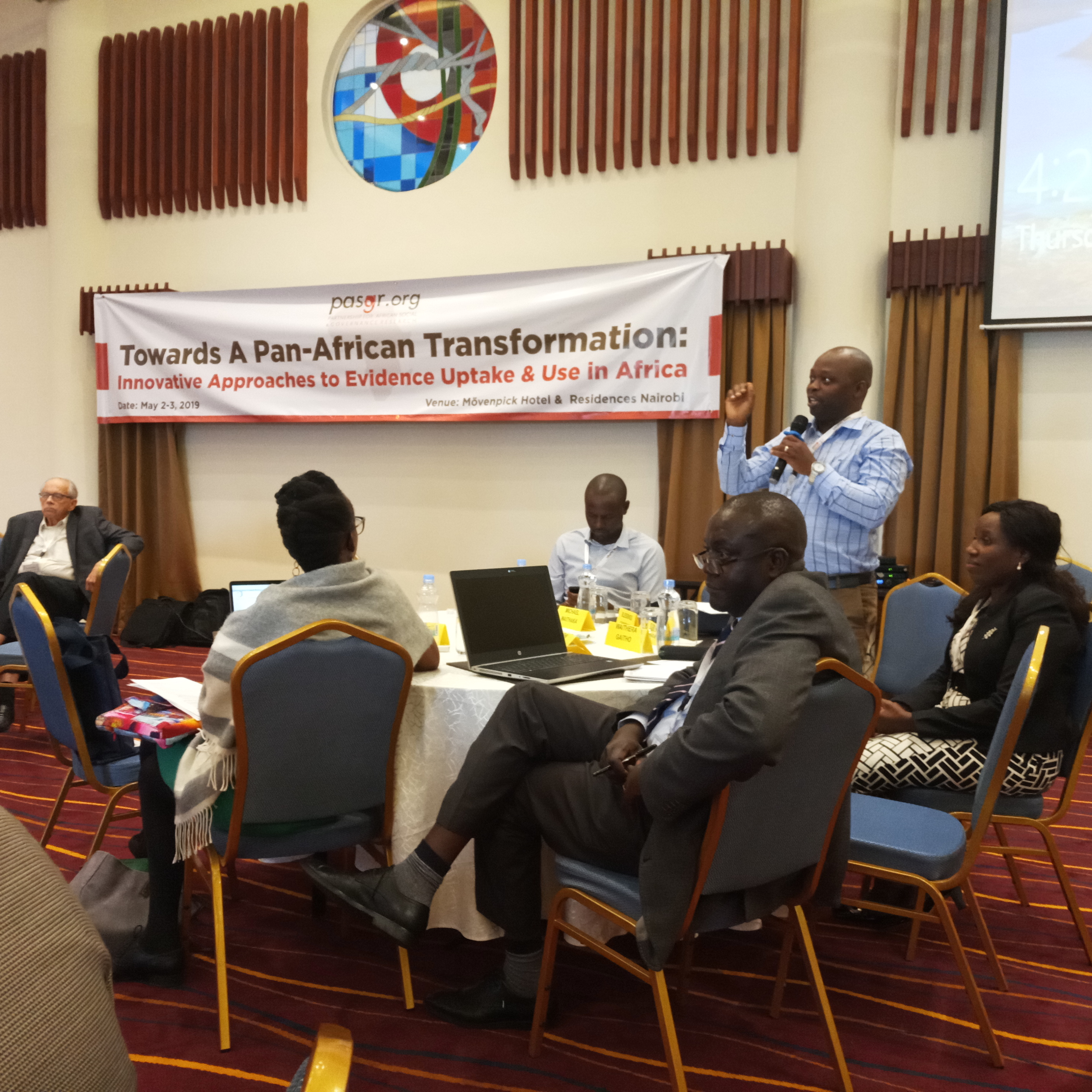 APRA members from Ethiopia, Kenya, Malawi and Nigeria attended a two-day convening meeting in Nairobi, Kenya, which was organised by Partnership for African Social and Governance Research (PASGR). The main objective of the meeting was to bring together 120 participants from 20 countries and diverse disciplines (including practitioners, researchers, scientists, activists, government officials and policy makers) to share and learn from unique different approaches to Evidence Informed Decision Making (EIDM). EIDM would help to build on various efforts in which researchers have worked with policy actors, decision makers and other stakeholders to advance policy formulation and action in Africa.

The use of scientific evidence to inform policy decision-making in is crucial due to the transformation sweeping across Africa. However, there is recognition that Africa is still lagging when it comes to evidence use to inform policy and program processes. One of the reasons that have been documented to this lack of evidence use is a lack of capacity to do so. To deal with this challenge, PASGR has partnered with Africa Platform for Social Protection (APSP, Kenya), Centre for African Bio-Entrepreneurship (CABE, Kenya), Institute of Policy Analysis and Research (IPAR, Rwanda) LEAP Africa (Nigeria) and Pamoja Trust (Kenya) to implement a model to bridge the gap between evidence and policy processes. The model is called “Utafiti Sera,” a Swahili word for “research policy.” The Utafiti Sera model builds a community of researchers and policy actors working together to ensure that appropriate and negotiated policy actions and uptake occur around issues for which evidence has been provided.

In his remarks, Professor Tade Aina, the executive director of PASGR stressed that this whole idea of EIDM has come with the growing recognition that there are a lot of people that are doing research work to inform policy, young researchers are on the rise, many universities have good data, but how evidence and data is being used to inform policy remains a big question. In addition, uptake of evidence in Africa has been slow and most of the initiatives promoted are without evidence that they will work. The executive director further explained that the Utafiti Sera model is a means of sharing research evidence with policy makers, since evidence is very important to bring political and social leaders to the table for negotiations.

The meeting was organised in such a way that there was a keynote address, plenary discussions, as well as breakout sessions. The main topics of discussion were tackling youth unemployment through technical and vocational training and the role of research evidence; innovative approaches to evidence uptake in Africa; and political economy plus political cultures’ influence and impact on evidence uptake. Some of the notable points during the discussions were that mobilisation of knowledge is not just technical but also political and social. What this definition means is that producing technical knowledge or evidence to inform policy is not enough, there is also the need to consider the political ramifications and social relations that exist where the evidence is to be disseminated and used. With this in mind, researchers will be producing evidence and packaging it to suit the political and social environment, hence improving the relevance of the evidence produced.

Regarding innovative approaches, the discussions were around what do we mean by innovation, and what makes something innovative. Here the main argument was that something innovative must be about new creations or new ways of combing existing elements in ways to address the current and/or future challenges. It is also thinking about people at the centre of policy processes and bringing them together to dialogue and provide solutions.  This is where Utafiti Sera comes in. From an economic perspective, Utafiti Sera is like a market of evidence and ideas and research; it creates space, a market place or a forum for evidence produced; and, it also helps to create an environment where all parties are treated equally, acknowledging their importance and not looking at one party, say an academic one, as more important. Some of the innovative approaches discussed included: communication, dialogue, engagements, use of champions, institutionalised transformation for sustainability, and capacity building to embrace evidence uptake. This non-linear policy process was emphasised by Dr. Hannington Odame, Executive Director of CABE, based in Kenya, in his presentation, ‘Charting the path for a youth apprenticeship policy: lessons from Utafiti Sera house on youth employment creation in agriculture and agro-processing in Kenya’.

What was clear from the discussions was that there is a growing understanding that evidence is available, but this does not translate to implementation of policy and initiatives informed by that evidence. This lack of translation is because there is disconnect between the evidence produced and what is being implemented. The meeting tried to identify where the problem lies: is it the part of the evidence producers, the evidence translators or the evidence users? My analysis is that, along the whole chain, something needs to be done. On the part of knowledge-producers, they must produce evidence and package it with the audience in mind, since as customers, the audience need to be convinced beyond doubt that the evidence is important. The knowledge brokers need to simplify the evidence even further to suit the environment in which they are to be used or considered. Evidence users also have a lot to do, starting from building their capacity, to being able to understand the evidence produced, as well as making efforts to use the evidence as much as possible in policy formulation and the planning of different initiatives.

As APRA, the meeting was very important for us to build on our policy engagement plan that we have developed through Participatory Impact Pathways Analysis (PIPA) and Accompanied Learning for Relevance and Effectiveness (ALRE) exercises. We have mapped the main stakeholders to engage through these exercises, to influence uptake of evidence generated from our policy researches and it was important for us to learn how other organisations are managing this, especially from the Utafiti Sera model.