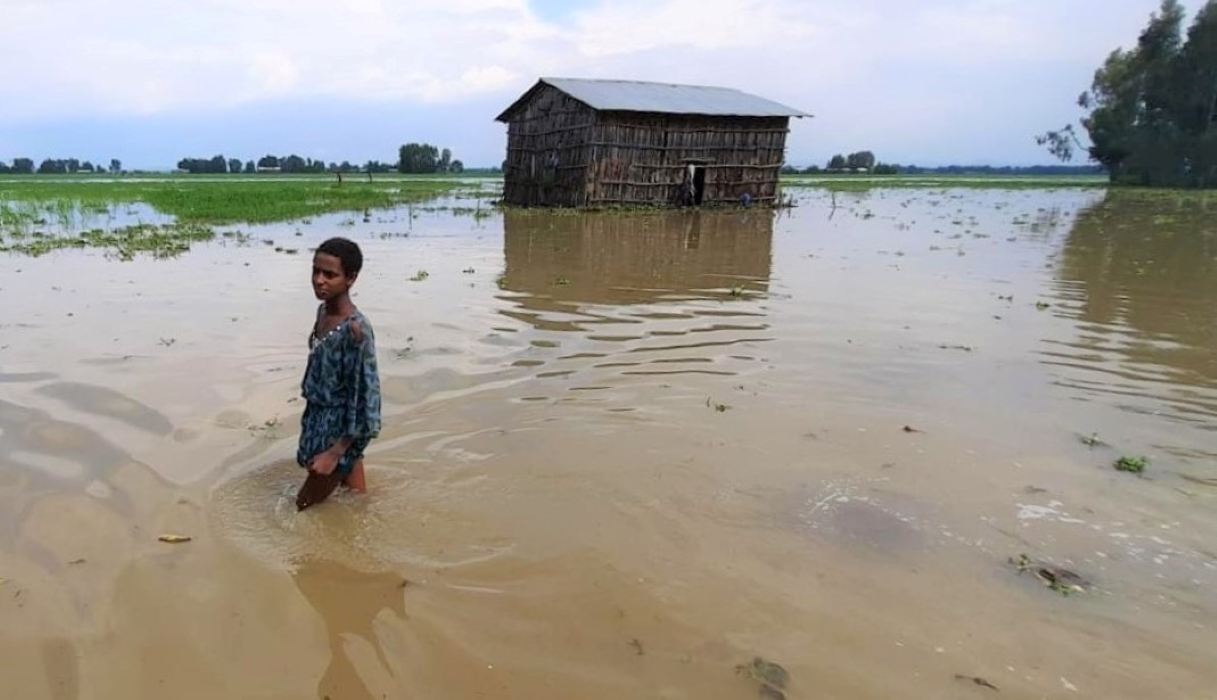 In September 2020, the northern Amhara region of Ethiopia was hit hard again by floods, already displacing 300,000 people, according to the UN. APRA researchers Dawit Alemu and Abebaw Assaye assess the extent of the damage on rice production and commercialisation in the Fogera plain, government measures to counter the floods, and the impacts on the livelihoods of farming households.

Ethiopia is facing diverse climate related challenges in 2020. The main challenges are related with the desert locust invasions in the Northeast (Tigray, Wollo and Afar areas) and South-eastern (Dire Dawa and Hararghe) areas of the country and floods linked with continuous heavy rains that has affected the Fogera plain and the lowland areas of Afar region.

The Fogera plain, known for rice production, was severely affected by heavy rains from June to September 2020 that caused flooding due to the overflow of the Rib, Gumara, and other tributary rivers of Lake Tana and Abay (Blue Nile). In addition, the flooding in the Fogera plain was aggravated by (i) the poor management of irrigation channels of the uncompleted rib river irrigation scheme, which has been under construction  since 2008, (ii) lack of flood management structures in the districts of the Fogera plain, and (iii) the absence of proper and coordinated watershed management practices (e.g. afforestation, terracing and other flood controlling practices) on the upper catchment areas (upland areas) of the Fogera plain, and a lack of flood-risk mitigation and analysis for a fast response.

We present the extent of flood damage in the Fogera plain based on (i) direct observations and discussion with flood affected rice farmers, and (ii) data collected from the district and kebele[1] offices of Agriculture and Early Warning and Risk Management offices. In addition to the extent of damage, we discuss the on-going efforts put in place to address challenges along with expected impacts on rice commercialisation and the livelihoods of farmers in the Fogera plain.

In general, flooding is normally expected in major lowland rice producing areas of South Gondar zone, around Lake Tana of the Fogera plain. Most rice farmers depend on flooding if the level of flooding is below the height of rice plant. Rice grows well when under water, but if the flood levels are high and submerge the whole field, then the rice plant will be ruined. This is what happened in the recent flooding in many parts of the Fogera plain.

In terms of rehabilitation, there is a plan to ensure availability of seeds from crops that can be grown when the floodwater subsides, mainly related to short maturing crops like pulses and crops that can be grown with supplementary irrigation. As reported by respondents, the expected challenges will be (i) ensuring the supply of quality seed of preferred varieties of short maturing crops, (ii) labour shortage, as all affected farmers need to plant at the same time, (iii) the possible communicable disease pandemic following the flood (e.g. typhoid, cholera and Malaria), and (iv) persistent food insecurity aggravated by both the flood and COVID-19 related food price surge.

Expected impact of the flood on rice commercialisation and farmers’ livelihood

The responses of affected farmers and experts in the respective district office of agriculture and Early Warning and Risk Management offices indicate the following short and long-term impacts related to rice commercialisation and farmers’ livelihoods:

The construction of Rib irrigation dam started in 2008 by a local contractor, Ethiopian Construction Works Corporation with the financial support of World Bank as part of the Bank’s Ethiopian Nile Irrigation and Drainage Project (ENIDP) with initial estimated budget of 1.3 billion birr and was supposed to be completed in 2012. It was officially inaugurated in 2018 after 10 years at an expense of 3.8 billion birr. However, the scheme is still not completed, with the regional government planning to do so in the first half of 2021. The main reasons for delay are (i) design changes, (ii) inefficiency of the contractor and public supervision, and (iii) reported delays and corruption in compensating for farmland and communal land.

Considering the importance of rice in ensuring food security, in expanding livelihood options, enhancing national self-sufficiency and reducing the burden on the low foreign currency reserves, it will be important to provide due attention at policy and development levels and take adequate short and long-term measures to address the challenges related with floods.

[1] In each district there are a number of Kebeles, and a Kebele is the lowest administrative unit where there are different offices including the Kebele office of Agriculture

Click here for a PDF version of this blog.