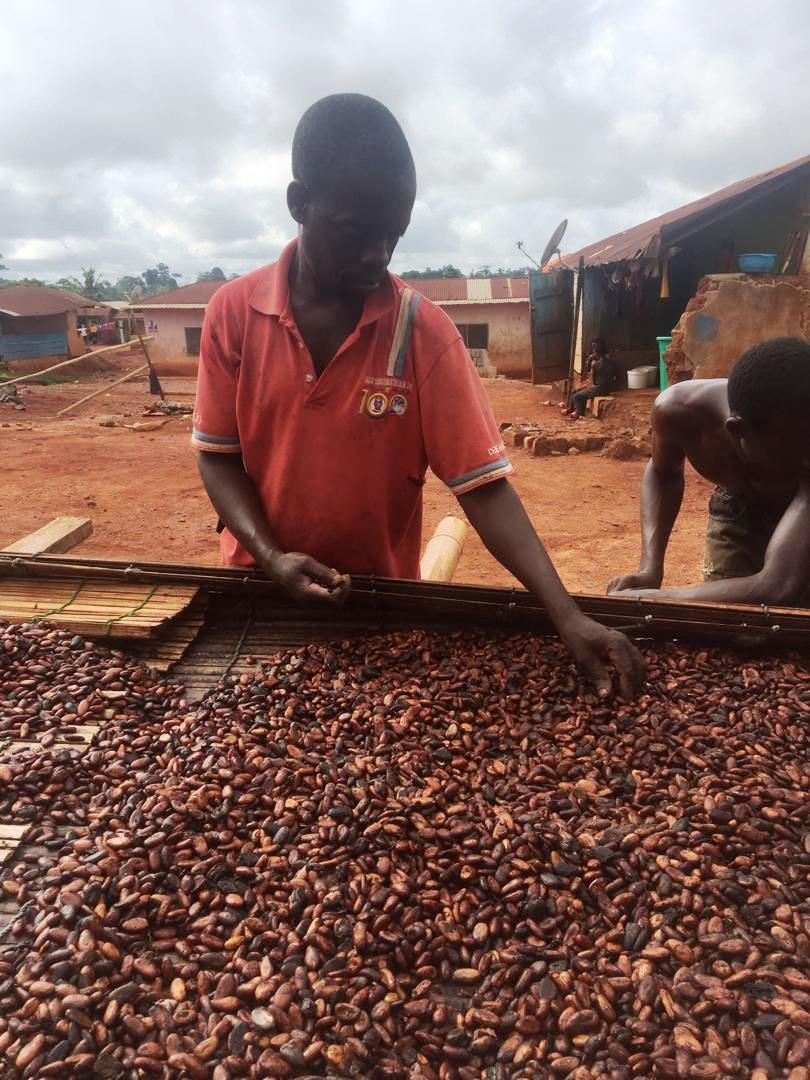 When in the 1880s farmers in southern Ghana began to plant cocoa, their main concerns were finding land to plant and mobilising labour to do so. The issue of finding land remained paramount until at least the 1990s, when the land frontier of forest to clear for cocoa finally closed. The last forests to be planted were in the old Western Region and particularly in Sefwi, now the Western North Region. This blog reflects on the findings of APRA Working Paper 73, which examines how farmers in Sefwi obtained land and mobilised labour in the late 2010s, and how that has changed since the 1960s.

For almost a century, students of cocoa in Ghana have focused on whatever they see as driving cocoa farming for the period they review. Three issues have captured the limelight.

One, from the 1880s to the 1920s, the key driver was the mobilisation of land and labour to create the new cocoa industry. This was done almost entirely by indigenous Ghanaians who adapted longstanding social institutions for acquiring land and recruiting labour, thereby allowing the rapid opening of forests for cocoa groves (Hill 1959, 1963). That this was done in the early days of the British occupation of the Gold Coast, with scarcely any involvement of the colonial administration or capital from Europe, flew in the face of the colonial prejudices that Africans needed protection and mentoring by Europeans to progress. This was to be far from the one and only time that African farmers took the initiative to raise cash crops, but it ranks as one of the earliest experiences in the colonial era.

Two, from the mid-1930s onwards, a new twist was added. As swollen shoot broke out in Eastern Region, groves were abandoned, to be replaced by new cocoa farms in Brong to the west and north. Whenever swollen shoot reached the new areas of cocoa, groves were mostly abandoned, and new farms opened in fresh forest further west. The cocoa frontier thus marched west for more than sixty years before it finally reached the Ivorian border in Western Region. Cocoa, it seemed, was profitable, but only so long as farmers could reap a rent from the cleared forests: new farms planted on fertile soil, farms largely free from pests, fungi, parasites and the deadly swollen shoot. But with time these advantages withered, as soils lost fertility and as pests and diseases built up. It made more sense to shift cultivation to new forest lands, rather than try to combat the difficulties that beset groves after a couple of decades of successful growth. This gave rise to studies of forest rents and migration (Austin 2014, Green 2017, Ruf & Zadi 1998).

Three, from the mid-1960s to the early 1980s, the temptation to use cocoa as a cash cow to fuel political spending proved too much for the governments of Ghana. Combined with more general macroeconomic mis-management, by the late 1970s cocoa had been ravaged: farmers got only a small fraction of the export price, and even that was paid in overvalued Cedis that could buy little. Many farmers more or less abandoned their cocoa, apart from those who could smuggle cocoa out to Côte d’Ivoire where a decent price could be had. This stimulated a literature on the dysfunctions of public policy and on how to reform it (Kolavalli & Vigneri 2011).

Our investigation in Juaboso District, Western North Region, with data collected from the field in late 2019, revealed a new set of circumstances facing cocoa farmers: indeed, a new drama. The forest frontier closed in the 2000s, so new forest rents could not be had by opening forest of new cocoa farms. If cocoa was to provide decent livelihoods, then the technical challenges of cultivating aging cocoa groves had to be faced.

Following the traditions of cocoa scholarship, we were honour bound to look at how land and labour were being mobilised for cocoa. We found something remarkable about the inheritance of land. The longstanding Akan norms of matrilineal inheritance, whereby the new generation of farmers obtains land from the female line (through the maternal uncle, wofa), now competed with a growing tendency for patrilineal inheritance. When interviewed, farmers individually and in groups paid homage to the maternal lineage — this was still the ideal it seemed — but when asked about any specific parcel and how it had come into the hands of the current farmer, almost every time it had come from fathers and grandfathers, and scarcely ever from the wofa. Fathers, in their final years, found ways to gift land to their offspring without apparently offending the lineage norms. They requested permission from the chiefs, recorded the gift in writing, conducted ceremonies in the presence of witnesses to honour ancestors — all of which usually squared the patrilineal handover with the matrilineal ideal.

Why the change? When land was abundant, and labour scarce, labour could be recruited within the lineage, against the promise that younger generations would be rewarded with their own land in due course. Today, no such new land exists. Hence lineage members are not prepared to work on the farms of the patriarchs. Indeed, even with the nuclear family, children are increasingly unwilling to work in their parents’ fields.

When extra labour was needed to augment that of the individual farmer, or the married couple, increasingly it was hired from the labour market. Lineage labour was in marked decline, cooperative labour gangs were all but a memory, and even sharecropping was rare. Instead, farmers would recruit one of the labour gangs — often seasonal migrants — to carry out laborious tasks such as weeding, harvesting and breaking pods, for a piece rate.

The reason for this? Contractual relations were more reliable than cooperative and social arrangements.

These findings prompt a couple of reflections. Were the arrangements seen as efficient, and were they fair? On efficiency, only partly so. Too many cocoa plots were being farmed with low yields, often because knowledge, capital, labour and land were not apportioned optimally. For lack of one or other ingredient, farmers struggled to achieve the yields that they knew they could get, if they had more labour, more capital or a little more expertise.

On fairness, well the cocoa farms were not equitably distributed, some farmers had much more land than others. But, and this is a big ‘but’, land was not being monopolised, was not being used to extract rents from others, and was not accumulating in the hands of the larger landholders. On the contrary, most farmers we interviewed had much larger farms in the past than they have today. The social need to distribute land to family had in most cases seen much of the original holding redistributed.

A final reflection: the changes that farmers told us about have largely happened gradually and with much less social friction than might be feared. We had wondered if inheritance under the new norms might lead to land disputes. We asked farmers repeatedly about this: for most our interviewees, it was simply not an issue. As outsiders, we can only acknowledge how well the cocoa farmers of Juaboso have negotiated their changing circumstances, and adapted longstanding institutions accordingly.

Green, E. (2017). From Extensive to Involutionary Growth: A Dialectic Interpretation of the Boom and Busts of Cocoa Production in the Gold Coast. Journal of Agrarian Change, 17(3), 518–534.