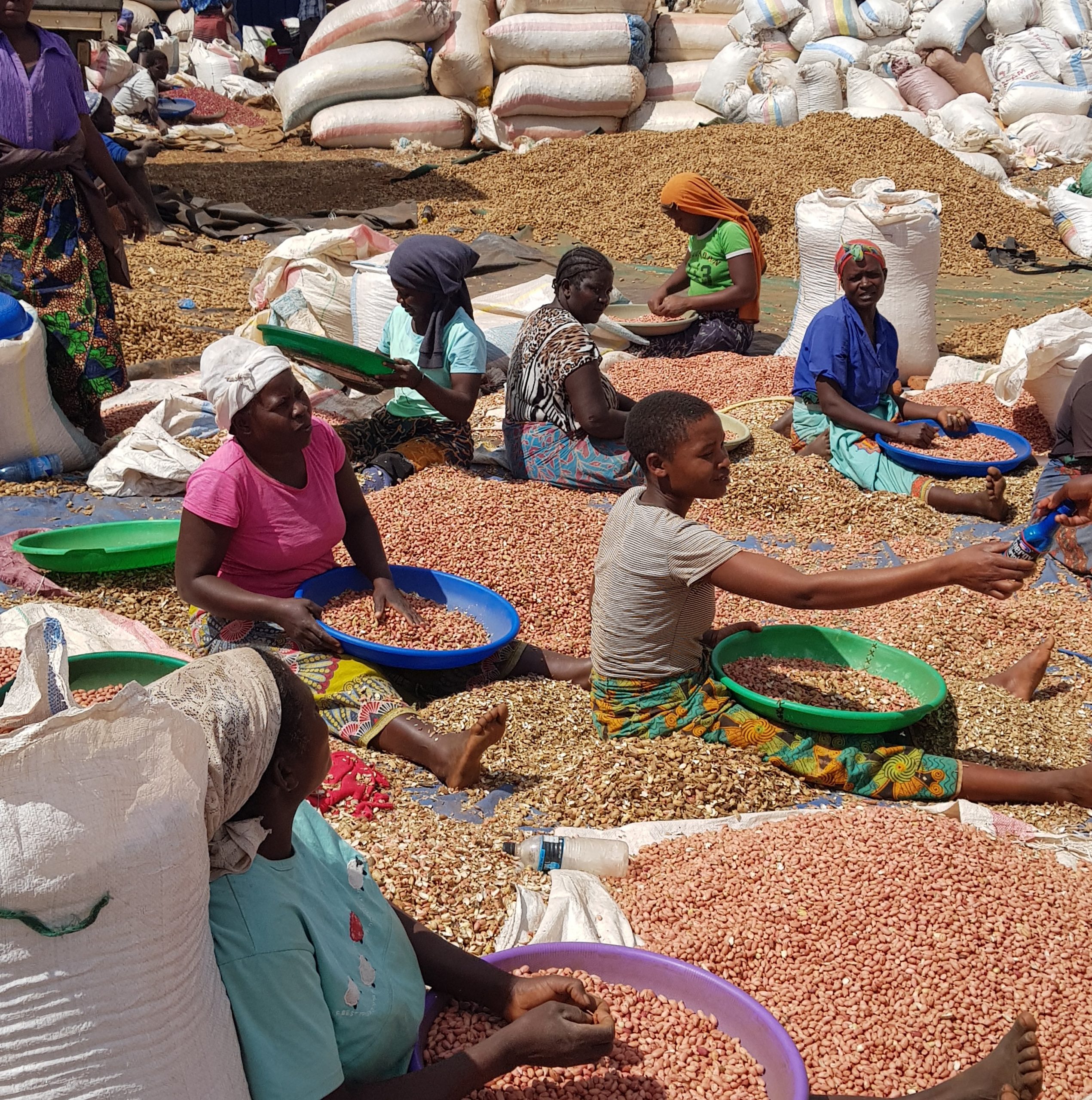 This blog highlights the findings of APRA Working Paper 56, observing the groundnut value chain in Malawi in both historical and contemporary perspectives through qualitative tools of inquiry. This study found that this value chain has experienced notable recovery in terms of productivity, but remains primarily informal and struggles to re-enter the lucrative formal global export markets. The following blog explores why this is the case, as well as examining the socio-economic importance of this crop and what can be done to support it in reaching its full potential moving forward.

Groundnuts are the most important legume crop in Malawi, both in terms of area planted and volume produced. It is grown by about 93 per cent of smallholder farmers, and largely, in central region districts of Dedza, Dowa, Kasungu, Mchinji, and Salima.

Groundnuts play a key role in the country’s national and household economies. They are a vital source of nutrition, especially for rural communities, improve soil fertility and are a source of income. This crop is estimated to contribute about 25 per cent of total income at household level in rural Malawi.

Decline of the groundnuts value chain in the 1990s

First was the collapse of the Agricultural Development and Marketing Corporation (ADMARC), which guaranteed farmers a ready market and facilitated exports with unwavering commitment to meeting international standards. ADMARC streamlined its activities following the full-scale implementation of structural adjustment programmes.

The collapse of ADMARC made it difficult for groundnut exports from Malawi to meet the stringent quality measures imposed by the European Union to counter aflatoxin contamination. It has been very difficult for Malawi’s groundnut industry to recover from this failure to maintain appropriate levels of aflatoxin in order to become competitive again in lucrative export markets.

Farmers also face serious marketing challenges and constraints, as the market is dominated by vendors who tend to offer farmers very low and exploitative prices. The vendors’ market is characterised by significant price fluctuations, which affect farmers’ production decisions and marketing behaviour.

Re-emergence of the groundnut value chain

The main driver for the re-emergence of the groundnut value chain is the apparent decline of tobacco as the dominant cash crop. Tobacco farming has experienced progressive decline, especially since the turn of the 1990s, due to decreases in quality and yields, and increased transport, transaction and marketing costs.

The men who dominated the cultivation of tobacco at its peak are now displacing women in the cultivation of groundnuts as a potential alternative cash crop. The decline of tobacco has been further accelerated by the fierce anti-smoking lobby mounted within the context of the World Health Organization’s Framework Convention on Tobacco Control.

The other drivers for the recovery of the groundnut value chain include NGO and donor initiatives, and government policies and programmes. NGOs and donors have been quite instrumental in mobilising farmers into clubs, associations and cooperatives, which promote and market groundnuts, and hence contribute to their competitiveness as a potential alternative cash crop. Meanwhile, government policies and programmes are essentially designed to support the production of high quality groundnuts with lower aflatoxin levels. For example, through the Farm Input Subsidy Programme, the government provided beneficiary farmers with improved groundnut seed, which progressively improved the productivity of this crop.

Stakeholders agree that lucrative groundnut export markets can be revived through the establishment of structured markets through the declaration of export mandates, which would ensure that all groundnuts are sold and exported through structured markets. Two commodity exchanges currently exist: the Agricultural Commodity Exchange (ACE); and the Auction Holdings Limited Commodity Exchange. While government officials push for these two exchanges to pioneer export mandates, private traders, both indigenous and Malawians of Asian origin, are fiercely opposed to using them. These traders feel that these two exchanges do not have the requisite capacity and cannot be independent arbiters, especially since some of the stakeholders behind the exchanges also operate as traders.

Progress towards the possibility of establishing structured markets has stalled completely. Indigenous traders feel they will be unduly exploited, while Malawians of Asian origin resist the entrenchment of export mandates which they feel will expose their tendencies of export under-declaration and transfer pricing. Policymakers are profiting from the impasse, with some of them exporting their share of crops through the shady deals.

Meanwhile, Mgona informal groundnut export market thrives right at the heart of the capital city, Lilongwe. This market is dominated by East Africans, especially Burundians, most of whom have settled in Malawi as refugees. Through this market, Malawi’s groundnuts are exported to the East African capitals of Nairobi, Kampala, Kigali, Bujumbura etc. This market is estimated to be worth more than US$100 million annually, despite being blatantly illegal and a subject of several policy discussions. The study found that key stakeholders in the groundnut value chain, such as policymakers and private traders, are linked to this market. This perhaps explains why the condemnation of this market does not translate into any concrete policy action to dismantle or regulate it.

The groundnut value chain in Malawi has huge potential to contribute positively to the transformation of livelihoods, especially in rural Malawi. The recovery of the value chain is quite significant, and further efforts could make it even more competitive as a potential alternative cash crop to tobacco. The study shows that the value chain can only realise its full potential if the politics of marketing are addressed once and for all. Policy efforts to dismantle the vested interests that have captured the chain are urgent, and it is critical to ensure that women are at the centre of the policy innovations to prop up the contribution of the groundnut value chain to the growth, development and transformation of Malawi’s economy.