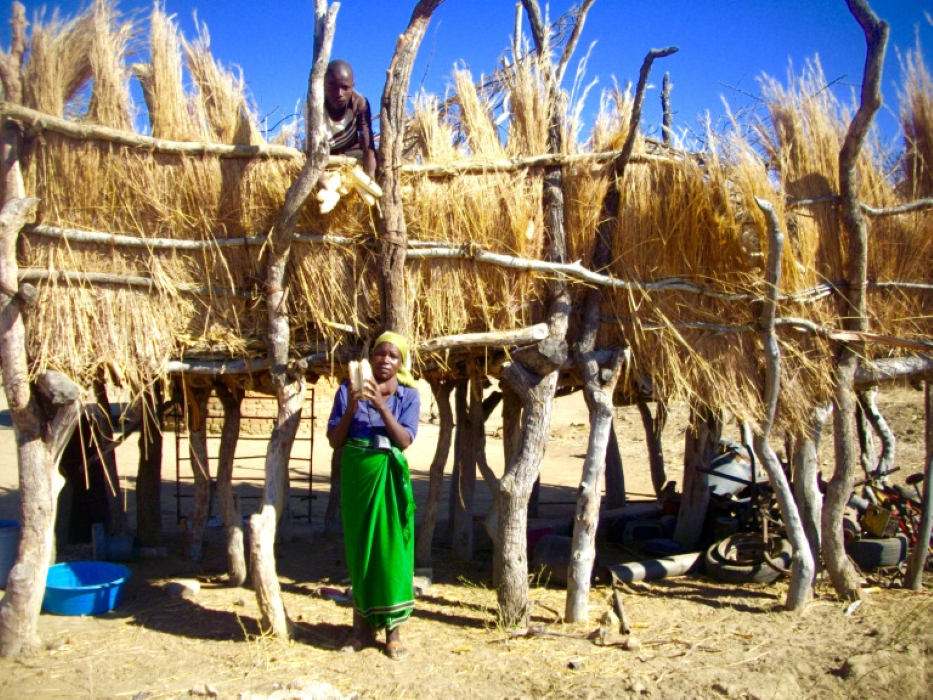 We investigated agricultural production across our communal area sites throughout Masvingo province during the 2016 and 2017 harvest seasons. These were relatively good rainfall years, with 690 mm recorded in Masvingo town in 2016-17, for instance. Compared to the past seasons, these were bumper harvest years, especially in the Lowveld site of Mwenezi.

The Mwenezi results are unusual, given that this is drought prone area, but good soils under higher rainfall can produce the occasional good crop, especially as land areas are significantly higher. Here 51% of households produced over a tonne of grain on average across the two seasons, much of this from sorghum. Some sorghum is sold under contract to brewers, but most is retained for food, and because of good storage can tide people over through a number of years.

Overall, crop diversity is limited. Outside Mwenezi, maize dominates, and pearl and finger millet have nearly disappeared, beyond being grown on very small plots for specialist production, usually for home brewing. Groundnuts are grown but not in large quantities and in these sites sunflowers are rare, because of the lack of markets these days. Cotton and tobacco are absent except for a few isolated cases.

Sales are also very limited. A few larger maize and sorghum producers sell, but most don’t. In fact across the two years on average 85%, 89%, 96% and 95% in the Mwenezi, Chivi, Gutu West and Gutu North communal area sites sold nothing, even in these relatively good years. With very few cash crops and little surplus to sell, this is largely a subsistence economy, one that requires off-farm income to supplement meagre agricultural production, as explored in a subsequent blog.

Tillage is especially reliant on access to livestock, which, as discussed in an earlier blog in this series, have a skewed ownership pattern. 50-68% of households use their own oxen, while others hire. Tractors are not a feature outside Mwenezi where a few have bought second-hand machines. Those with without other options must hoe their land, a feature most evident in Mwenezi.

Big contrasts with the A1 resettlements

These patterns of agricultural production contrast significantly with the nearby A1 resettlement areas where, especially in the higher rainfall areas, production is higher. In 2010-11 for example, sites nearby the two Gutu sites produced on average 844kg and 1238kg of maize, with 38% of households selling surplus maize. Over the period from 2003-2013, 44% of households in those A1 sites produced more than one tonne of maize. Cultivated land areas are higher, averaging 3.2 ha in the resettlements near our Gutu sites, but also the intensity of production is greater, with higher inputs, including fertiliser (with over half of the households applying fertiliser).

As discussed in a later blog in this series, labour hiring is more common, both of permanent and temporary workers. Across our A1 land reform sites, excluding Mwenezi, over a third of households are regularly producing surpluses and reinvesting in the development of the farm. At the time of our last major census of A1 sites in 2011-12, the level of mechanisation was modest, however, with only half a dozen tractors across all the A1 sites, but this has changed since as people have invested in tractors and other equipment, notably pumps.

In the A1 resettlement areas, this results in a dynamic of accumulation for a significant group, where investments in farm and house improvements occur year on year. Not everyone manages this, and the patterns of differentiation – and associated dynamics of class formation – are very evident, with those not able to accumulate either dropping out and moving away or becoming wage labourers supporting the production of the accumulators.

Across the communal area sites this dynamic is not seen. Those able to realise surpluses are vanishingly few. Only around 15 percent in three of the areas achieved levels of output of grain sufficient to provide for household food needs, and even fewer sold surpluses. And this in relatively good rainfall years.

Although there is obvious differentiation in assets, production, labour hiring and so on, as other blogs in this series show, most communal area households are poor, unable to do much more than subsist off their farms and rely on off-farm incomes of various sorts. Agricultural production in the communal areas is therefore very low input and low output.

As the table shows, across the communal area sites, fertiliser input levels were low, although increasing in the wetter Gutu sites. Virtually no-one uses synthetic fertiliser or manure in Mwenezi, where soils are good and the potential for crop ‘burning’ due to excessive fertiliser is high. This contrasts with the sandy soils of the miombo areas further north, where higher rainfall and leaching means soil fertility is low and additions are required. In all sites, as another blog will discuss further, labour hiring is minimal, and outside Mwenezi collective work parties are very rare.

Perhaps surprisingly, given the low levels of production, outside Mwenezi the vast majority use certified maize seed, purchased hybrids or open pollinated improved varieties. The proportion is less in Mwenezi, but still nearly 60%. The long-term commitment to improved varieties across Zimbabwe persists, supported by a 50 year tradition and continued extension reinforcement. This makes the economics of production of maize very risky, especially if purchased fertilisers are added too, and so this seed, along with most effort in agricultural production, is focused on the homefield areas, where extra labour, fertilisation and, if needed, additional irrigation can be applied. In small quantities, such maize may be produced as green maize for local consumption and sale rather than for grain.

Pesticides were bought by around a quarter of households, but these were in very small quantities and mostly applied to vegetables. Horticulture as a source of income, however, was highest (but not very high) in Mwenezi where irrigation projects provide opportunities. This again contrasts with the A1 resettlement areas, where informal irrigation has taken off in all sites, resulting in significant production of vegetables and green maize for market.

Finally, commercial credit was purchased by no one across the sites. Limited contracting for sorghum in Mwenezi provides some finance, but otherwise farmers are on their own. They rely on off-farm sources and remittances to finance agriculture, but overall, and by contrast to the A1 resettlements, this is a very low input, low output form of agriculture. Indeed, the possibilities of improvement are constrained. Land areas are small, soils are poor or rainfall is highly variable, labour is scarce and many farm owners are old and unable to invest effort.

Agricultural production remains important of course, but more as stop-gap social security rather than as a basis for accumulation. This is vital given the absence of wider welfare opportunities and declining employment possibilities in Zimbabwe, but it is no surprise that government, NGO and donor food and cash for work schemes are an important source of livelihood for a significant group in these areas.

While there are many well-meaning projects aimed at improving agriculture in the communal areas of Masvingo province – usually with a ‘climate smart’ or ‘resilience building’ tag these days – you have to wonder whether these can have any impact, beyond marginal, often very labour intensive, improvements (like ‘conservation agriculture’). The communal areas, as discussed in other blogs, are structurally poor and disadvantaged and technical tinkering will make little difference. Maybe there are some high value, niche products that can be promoted – such as has been done with chillies in some parts of the country – but our Masvingo sites are in lower rainfall areas, more remote from markets, and it may make sense.

In sum, contrasting the communal areas with the A1 resettlements demonstrates how important land redistribution is if agriculture is to become more than a marginal, subsistence activity for most.

This post is the fourth in a series of nine and was written by Ian Scoones and first appeared on Zimbabweland.